For many natives of Agugu Oja in Agugu community, Ibadan North East Local Government Area of Oyo State, Agugu Health Post has become a Mecca of some sort to many primary healthcare seekers.
The immunisation post which has transformed to a full-fledged health facility, now offers antenatal, post natal care, family planning, even accident and emergency first aid services used to be a mere retail shop for provisions, others.
That was before late Madam Alice Mogbonjubola Ogunlana, donated it to serve as immunisation stand for Agugu community due to her passion to ensure that no baby dies from preventable causes.
Today, the immunisation stand, the busiet of a set of twin shops attached to the home of its donor, has gradually transformed to a ‘facility’ rendering services, thus overstretching its capacity.
Serving between 20 and 30 children during immunisation visits, it caters for women and children not just in the host community, but, the environment of Bodija, Omi Adio and Iwo Road.
A recent visit by DAILY INDEPENDENT to the health post on an immunisation day showed that over a dozen mothers with their babies already sat in rows by 10am. One of the babies was born barely 24 hours earlier. She had been brought by her mother for her first vaccines.
There was hardly any sitting space. Wooden benches under the canopy attached to the shop were fully occupied. As one mother is attended to, the next would quickly take her turn.
DAILY INDEPENDENT further observed that many of the pregnant and nursing mothers trooping to the health post were full of expectancy and optimism of receiving attention.
“Yes, they do – many of them enjoy the services they are receiving here despite that it is not conducive,” explained Mrs. Folasade Oyebamiji, the Community Health Officer (CHO) in charge of the post. The dutiful woman said she has been supervising the extremely unsuitable place for about six years, and is supported by one other nurse and an ad-hoc staff that she employed.

Accelerated Action for Impact
Agugu Health Post was mentioned during a workshop and field visit organised by UNICEF in collaboration with Oyo state government on improving health outcomes for children in the state through Accelerated Action for Impact (AAi).
Unfortunately, Agugu is like many other communities in Ibadan North East, Oke Adu, Ibarapa North Local government areas. Communities in these LGAs were ranked highest in child deaths in Oyo State in 2016. Indeed, these were places unsafe for babies to be born, before the initiation of the Accelerated Action for Impact project.
Dr Bola Hassan, Health Specialist, UNICEF Akure Field office, speaking at a two-day South West media workshop with the theme: “Improving Health Outcomes for Children in Oyo State through Accelerated Action for Impact,” categorised the state as one with very high infant mortality based on the National Bureau of Statistics (NBS) report in 2016.
“Oyo State is the third highest contributor to neonatal deaths in absolute numbers in South Western Nigeria in 2016; it ranked with 15 other states contributing 50 per cent of newborn deaths in Nigeria,” said Dr Hassan.
Regrettably, the babies were dying because of many avoidable factors, including poor cord care, immunisation, vitamin A and handwashing, as well as inadequate exclusive breastfeeding, poor health-seeking behaviour, and poor access to quality health services.
According to her, “These are preventable newborn deaths using interventions that address all these issues until the child becomes an adolescent in these high burden states, thus crashing the overall neonatal rate for Nigeria.”
Contributing, Oyebamiji, said, “Obviously, the need to bring healthcare closer to the people and stop newborn deaths informed the setting up of the health post at Agugu Oja.”
Despite the space constraint, the CHO said the health post received a face lift after she built shelves and procured a two-seater chair for the booth.
She narrated: “This (Agugu Health Post) is not a clinic. The place was given to us for free by Mrs. Ogunlana, who died recently. I made the shelves to give the place a facelift; I initially had carpets in the shop so as to make it attractive.
“We need a place that would give room to confidentiality and dignity of the women. A Good Samaritan, who preferred anonymity, gave me the couch used for family planning here. We offer such services. So women have access to all the family planning types like Inter-Uterine Device (IUD); and we do all family planning types, except vasectomy and tubal ligation. 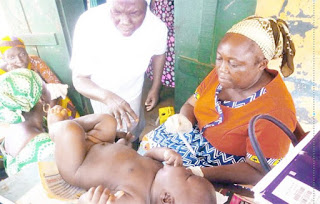 For ante-natal services, Oyebamiji said they are collaborating with Community Birth Attendants, (CBAs) in the community and refer pregnant mothers to receive anti-tetanus toxoid. She stressed that sensitisation programme is being done on the need for women to bring their children for immunisation.
“We receive 20 – 30 mothers on immunisation days. However, they come in trickles because they’ll watch from afar to confirm if we have started and then come in.”
Worried about the congestion, oyebamiji revealed that Sometimes she is discouraged from going to the centre,

Oyebamiji said, recently, one of the politicians came here during their campaign and promised to relocate the centre from here, and described its condition as unacceptable.
She lamented that it has been the trend in the past four years as these politicians make promises without fulfillment.
She said; “One of the politicians have even gone as far as choosing a site, a nearby primary school and was to dig a borehole for water and other related facilities. But, it has remained a promise.”
On when the clinic established, she told DAILY INDEPENDENT that it has been in existence before 2010, since its renovation was done in 2010.

A Passionate Appeal
She said; “The government should help us look for another place or they should rent the entire building and restructure it. In the worst case scenario, the government can negotiate for the other shops and redesign it and make it befitting. This will really improve the services we render here.”

A Community’s Burden
Oyebamiji said, “Closing this place down has become a difficult issue because many mothers and other patients use the facility, as bad as it is. Patients come from Iwo Road, Bodija and Omi Adio to this place. The number of patients we receive here is more than what so many centres receive.”
“One of the problems associated with closing the place down is how to track the patients that are already used to this place.
“I found that many mothers like this place even though it’s not conducive to healthcare provision. They would choose to sit in the sun and take their turns, rather than go elsewhere. So, we need a redesign of this place to build confidentiality, a youth-friendly environment that would also allow the young people to use the place.

Alhaja Muibat Adegoke-Lawal, leader of the Community Birth Attendants (CBAs) in Oyo State told DAILY INDEPENDENT; “We have called for help from many quarters and we have sought the support of philanthropists to improve this place or build another one.
“As you can see, the mothers and their children are in the sun, with hardly any sitting space. We are helpless.
“We want mothers to come, but there are not enough amenities. We would love our mothers to sit comfortably and be properly attended to, but there is no way to do this.”
She lamented that the health centre is not good enough as it’s too small for Agugu people, but for the perseverance and endurance of Mrs. Oyebamiji, the CHO.
Responding during an interview at AAi workshop, Odebiyi Rachael said there are some places we have little problem with our facilities in Agugu area.
She said; “In the shop used as a health post, immunization outreach is being done there, adding that family planning, maternal and child healthcare is being carried out at the post.

She further said; “We don’t allow the health officers to take deliveries there because it’s a shop. We have complained to the management and with the help of the Primary Healthcare Board in Oyo State, they are planning to build a facility but it is not yet done.
“We have 3,855 thousand babies to be immunised all through the year 2019. We are using a very small area in Agugu health post.
“I will say health facilities are inadequate in the State. I have two schools where we have health post and health workers working there.
“We also have a health post used as a facility where the health workers share the same hall with teachers which is very wrong. We have one in odiage while another is at St. Mary.
“In the face of all these challenges, what we use is demarcation board to shield our patients.
“I will say that immunisation in these shops used as health post has increased because we do our outreach twice a month.
Since there is no means of transporting people, we just tell them to find a place in the community,” Odebiyi explained.