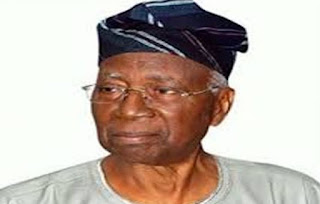 Chioma Umeha
Emeritus Professor Oladipo Akinkugbe has called on the federal government to set up a Nigeria Health Fund which the private sector will be compelled to pay 0.2% of their pre-tax profit into. He made the call after he was given a Lifetime Achievement Award at the 6th Nigerian Healthcare Excellence Award (NHEA 2019) in Lagos. The award was presented by the Deputy Governor of Ogun State, Engr. (Mrs.) Noimot Salako-Oyedele.
According to a statement weekend signed by Moses Braimah, Director, Marketing, Communication, & Strategy
Dr. Stella Okoli, Group Managing Director of Emzor Pharmaceutical and Professor Eyitayo Lambo, former Minister of Health were also given the Lifetime Achievement Award.
Akinkugbe who went nostalgic, gave an account of how similar fund(s) was set up in the past, both in local and foreign currencies, but was frittered away by a past military regime. The amount raised was so huge that it was almost higher than the Nigerian budget. He believes with such fund in place, all levels of Nigeria healthcare system will be revitalized and transformed if well utilized.
Dr. Anthony Omolola, Chairman NHEA Advisory Board in his remarks said, “NHEA has continued to receive increasing acceptance by stakeholders because of its integrity. We got about 6,000 nominations this year. This is over 300% increase compared to nominations received in 2018.”
“The large number of guests and nominees present here today is a further attestation to this.” Omolola added.
Other notable individuals and organisations who were recognized and celebrated at the health award ceremony include; Dr. Mohammed Ali Pate and Dr. Ayobami Aranmolate who were given special recognition for leadership in the reduction of polio in Nigeria and revolution in cosmetic surgery in Nigeria respectively. Grofin Nigeria, Access Bank, Smile 360 Dental, GE, UCH Ibadan, Eye Foundation, Healthplus, May & Baker, DCL laboratory, Clinix, etc. were also winners in different award categories. Below is a roll call of all winners.
PharmAccess Foundation sponsored the PharmAccess Outstanding Safecare Facility of the Year category.
NHEA is organized by Global Health Projects & Resources in collaboration with Anadach Group, USA.