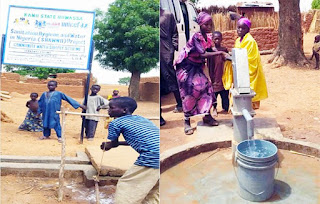 Chioma Umeha
Global effort to ensure improved water, sanitation and hygiene conditions seems like a drop in the ocean. As at today, about 4.4 billion people do not use improved sanitation, while 2.1 billion people worldwide are still drinking unsafe water.
The new WHO/UNICEF Joint Monitoring Programme (JMP) reports broke the sad news that “About 2.1 billion people worldwide lack access to safe, readily available water at home, while 4.4 billion lack safely managed sanitation.”
Analysts have described the trend as a worrisome one which has pitched children worldwide up the creek. The reason they say is simple – Clean water, sanitation, good toilet and hygiene practices are essential for the survival and development of children.
Open defecation, unclean water, and sanitation-related diseases are some of the leading causes of death of children under the age of five. Every day, over 800 global children die from preventable diseases caused by poor Water, Hygiene and Sanitation (WASH), the United Nations Children Fund (UNICEF) reports.
Perhaps, more frightening is Nigeria’s statistics of water-borne diseases among children. The report said that since the past six weeks, eleven percent of Nigerians suffered diarrhoea, stressing that 76 percent of this number were children who are under five years.
Yet poor water, sanitation and unhygienic practices such as open defecation is still highly pervasive in the country.
Little Amina Abdulahi, aged seven was pressed to use a toilet. Quickly, she strolled casually to a nearby bush and passed feces. After defecating, her tiny hands reached for a bamboo stick to clean her anus. The bamboo stick could not do a thorough cleaning, so she cut some green leaves to do the job.
As she walked leisurely home, she stepped on feces in the field which is an open defecation site for her the household. Innocently, Amina wiped her legs on the grass to clean the feces. It was not surprising that she later developed diarrhea.This is because she did not wash her hands properly and used the same hands to eat.
Speaking to DAILY INDEPENDENT, Saleh Haruna, ward head in Jedawa Fulani village, reasoned that though Amina survived from diarrhea, many children in Jedawa Fulani village were not as lucky.

Saleh said, “Water-borne diseases like acute diarrhea and cholera after persistent vomiting and stooling has claimed the lives of many people in his community, especially children.”

Many of them believe that passing of feces is a kind of ‘bowel relief.’ It is also a natural urge and when it comes, the utmost priority is to quickly get the relief by passing the feces in the next available corner, regardless of hygiene. Unfortunately, the village does not also have potable water.

Diseases such as cholera, diarrhoea, typhoid and poliomyelitis (disease affecting brain and spinal cord) among others which are contacted through water contamination are common in the community, the Village Head bemoaned.

The picture of water, sanitation and hygiene crisis in Jedawa Fulani village is sordid and heart rending. The only source of water is from wells whose depths are between eight to 15 feet.

Confirming this, Saleh Haruna, ward head, whose major source of livelihood is animal rearing and crop farming told DAILY INDEPENDENT that well water has been the only drinking water for the residents of Jedawa Fulani village.

Corroborating, Amodu Magaji, Driver, at Dambatta LGA, pointed at one of the wells where DAILY INDEPENDENT reporter met him drawing water said, “This 40 years old well is the only source of water to many households in this part of Jedawa Fulani village. It doesn’t dry no matter the season, but it serves many households in this part of my village throughout the year. This particular well is nine feet, but there are others that are even 15 feet in depth.”
On the toilet hygiene in the community, Magaji lamented that due to poor access to improved water and sanitation, his community indulges in open defecation.
He, however, said his community is willing to use clean toilet and stop open defecation if government would assist them.
He expressed concern over the prohibitive cost of buying building materials like stone, cement and other tools required to build good toilets and boreholes, saying the government should support the community in this regard.
Jedawa Fulani village represents only one community in Dambatta LGA, Kano State, out of the Nigeria’s 764 Local Governments where open defecation is still prevalent.
Kafawa Community Embraces WASH Campaign
During on the spot assessment of Yammawar-Kafawa community also in Danbatta LGA of Kano State, it was observed that the community has embraced the WASH campaign.
Investigations showed that the over 500 residents of the community were excited at the outcome of their new found habit of using safe water, improved toilets and hygiene practices like hand washing in the last five months.
The visibly excited village head, Rabiu Usman, said, “We are happy and very determined to maintain the clean environment we now have as it has drastically reduced some of the health challenges confronting our children. “Some of the bad hygiene we practised was out of ignorance, but with this enlightenment and campaign, our community is now better off because we are now the envy of some of our neighbours.”
On further investigation, it was discovered that the community which has over 50 houses, barely had improvised latrines before the WASH intervention. However, there are now over 40 toilets in the village and more were being built in order to stop open defecation through WASH project.
In an interaction, 40 -year-old Amodu Magaji, one of the residents, who has two wives and eleven children confirmed, “We used to defecate anyhow because very few houses had toilets for 50 years. But, we now have over 40 and more toilets.”
Another fascinating thing about the new toilets is the improved sanitation and hygiene.  Investigations further showed that all the pit latrines had covers with long sticks and rubber kettles hanging in between two sticks and soap for washing hands immediately after defecating.
This new form of hand washing local technology was found almost everywhere in the village – in the only primary school, the Mosque, village square and every public place.
Commenting, Bioye Ogunjobi, UNICEF’s Water, Sanitation, and Hygiene (WASH) specialist, said that UNICEF has supported the Ministry of Water Resources to ensure access to hygiene and sanitation in 11 of the 774 LGAs in various states across the country.
Ogunjobi stated this at a recent media dialogue in Kano on sanitation and hygiene, themed; “Clean Nigeria: Use the Toilet Campaign organised by Child Rights Information Bureau (CRIB), Federal Ministry of Information and Culture in collaboration with UNICEF.
Speaking at the event which had the support of European Union (EU) and the Department for International Development (DFID), he said, “There are 11 local government areas where WASH integrated project has been successfully implemented.
“But, we are likely to have two more in Jigawa within the next one month. But, but this is a drop in the ocean, because we are talking about 774 LGAs and we have been able to address Open Defecation in only 11 LGAs with 764  of them left,” Ogunjobi added.
On how communities become free from open defecation, the WASH specialist noted, “We were able to achieve this by supporting the Federal Ministry to implement what we call, ‘Community Led Total Sanitation’ (CLTS).”
He explained that the CLTS is an approach which helps members of various communities to realise the dangers of Open Defecation (OD) and take collective decision to stop the act by building and using improved toilets.
Also, Olumide Osanyinpeju, Deputy Director, Head CRIB, FMIC, said the Federal Ministry of Water Resources with support from UNICEF, in partnership with Inter-Ministerial Agencies, Civil Society Partners, the Private Sector, and the people of Nigeria, is currently leading the Open Defecation Free (ODF) campaign to end the practice in the country by 2025, and achieve universal access to safely managed sanitation by 2030.
With 47 million defecating in the open, while 33 million of them use unimproved toilets, Nigeria is the second largest nation practising open defecation worldwide, after India, according to the findings from the 2018 WASH National Outcome Routine Mapping (WASH NORM) survey. However, analysts say, If all hands can be on deck, we can combat the unhealthy practice.