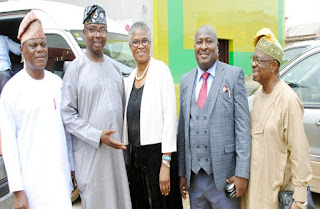 The Pharmaceutical Society of Nigeria (PSN), Lagos State Branch, has called on Babajide Sanwo-Olu, the governor-elect, to expand the frontiers of health operations to build a virile and productive system that would become a national benchmark in the running of healthcare programmes in the country.
The call was contained in a congratulatory letter Pharm. Adeniran Bolanle, Chairman, and Pharm. Babayemi Oyekunlye, Secretary, of the Lagos PSN sent to the governor-elect over his victory at the just concluded governorship poll in the state.
The duo while alleging that the current managed healthcare programme is ‘haphazard and unduly skewed’ against some prime stakeholders in the state specifically urged the governor-elect to reorganise it.
This, they contended, would guarantee an impactful health insurance programme with commensurate coverage and growth rate.
They further claimed that the challenges of the NHIS are linked to a poor implementation mode and alerted the new governor to avoid replication of the same problem in the implementation of the scheme in the State.
“It is a worrisome commentary to put on record that coverage of the National Health Insurance Scheme (NHIS) at national level since inception in 2006 remains an abysmally woeful less than 2.0 percent (1.72 per cent based on the declaration of the last Executive Secretary of the Scheme). The woes of the NHIS are holistically traceable to a poor implementation mode through and through,” they said.
PSN therefore called on the new governor to urgently open hitherto restricted borders of restriction in benefit packages available to health care providers in terms of privileges and resources.
They stressed; “The welfare of all health professionals must be grounded on equity, fair play and justice to all concerned. Our Lagos cannot continue to walk on the path of greatness if only a personage as epitomised by dominating the policy direction of the state Ministry of Health in 20 straight years. We at the Pharmaceutical Society of Nigeria (Lagos State Branch) continue to assure Your Excellency of our determination to work with you and in this direction, we declare very boldly that we have a pack of broad spectrum members who can help move your administration to the next level which is the greater Lagos we dream of,” they added.
Other measures they put forward to the governor-elect to build capacity in the march towards the greater Lagos initiative include the establishment of a Faculty of Pharmacy at the Lagos State University (LASU), Ojo, as part of their aspiration and reviving of the dwindling fortunes of the Drug Revolving Fund project as a major tool to ensure availability of drugs in public hospital pharmacies in Lagos State.
“The Pharmaceutical Society of Nigeria (Lagos State Branch) will commit itself to offering advice to the Lagos State Government at no cost on how to achieve zero funding for these projects which only requires sound cost recovery mechanism as bedrock.
“Finally, Your Excellency, we wish to inform you that we are praying for you. You will succeed where others stuttered and you will make manifest the mega city initiative on which Lagos State is inclined. Under your watch, Lagos State as an entity will become Africa’s leading light in the comity of similar entities.
“Please, be assured of the guarantees of our commitment to collaborate with your envisaged dynamic administration always,” the pharmacists said.
They added, “Your victory was obviously a product of hard work, good planning and dedicated track record of service to the people of Lagos State.
“The Pharmaceutical Society of Nigeria (Lagos State Branch) is particularly thrilled that in perfect alignment with your undiluted character of simplicity and humility you have already opened the window of opportunities to all Lagosians including your critical stakeholders like the various professional bodies.”