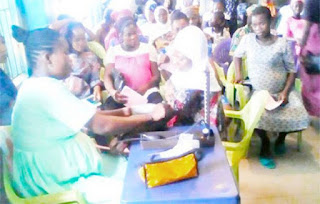 With the poverty level of Nigerians which is put at 70 per cent, reducing out-of-pocket payments for healthcare and making it accessible to all, especially, the indigent at the grassroots has remained a huge challenge to the country. However, health insurance provides financial protection for the poor spreading risks and pooling funds makes healthcare affordable and accessible to Oyo state indigenes, writes CHIOMA UMEHA.

To ensure universal access to quality health delivery by protecting Nigerian families from financial barriers to health care, and ensuring availability of funds to the health sector the National Health Insurance Scheme (NHIS) was launched 14 years ago.
However, less than two decades after its launch, experts have lamented on its slow implementation as only five per cent coverage has been achieved by the scheme.
It is instructive to note that the NHIS was established under Act 35 of 1999 by the Federal Government and  is expected to improve access to health services and bring overall development of the country
To ensure that residents in Oyo state enjoy the NHIS, the state recently introduced a new premium payment for its insurance scheme.
According to Dr Olusola Akande, the Executive Secretary of the agency, Oyo State Health Insurance Agency(OYSHIA) farmers are now allowed to pay premium with farm produce.
Speaking recently during a media visit facilitated by United Nations Children’s Fund, (UNICEF) and Oyo State Health Insurance Agency, Akande said;“Many people who would have loved to enroll in our health insurance programme but lack the financial capacity to pay the premium voluntarily agreed to give us yams and palm oil and other farm produce in lieu of cash to be paid for the premium.” He further noted that even farmers and others who cannot afford to pay the N8, 000 are encouraged to pay with their farm produce to the agency in lieu of cash.
“In the agency, we have set up a marketing section that is aiding us to sell the yams and palm oil and other farm produce and when we sell them, we help the owners to keep the money until it is enough to pay the premium and enroll them.”
Akande said the goal of health insurance was to provide quality healthcare services for the people of the state without experiencing catastrophic health expenditure.
He expressed worry that many people are still not aware of the activities of OYSHIA and required the support of the media to propagate the importance of health insurance to the people so that more people would enroll.
“OYSHIA has been rated very high in terms of performance. We will not relent in making sure that the people of the state enjoy quality healthcare without expending their entire savings on medical bills,” he stressed.
Akande, revealed that under two years, the scheme has made amazing achievements which include over 80,000 enrollees from 33 LGAs, 350 vaginal deliveries and 78 caesarian sessions (CS), over 10,000 children under five years and pregnant women covered, creating employment opportunities for residents, upgrade of three fully upgraded OYSHIA accredited PHCs and seven others at various stages of completion, as well as institutionalisation of engagement platforms for various stakeholders.
Affirming that 100,000 civil servants had been captured, but the target is 400 to 450,000. Akande regretted that in spite of the success so far, there are still challenges such as beliefs, attitudes and customs of people on insurance policies, adverse selection, attitude of health-workers and enrollees, sponsorship and cross-subsidy for the vulnerable groups and the poor, limited resources for advocacy, publicity and enlightenment, and inadequate and untrained manpower logistics.
To him, it has become imperative for people to visit their doctors as occasion demands with the aim of determining their health status. According to him, health insurance remains protection against financial hazards, spreading of risks and pooling of risk to ensure that people remain healthy with a little financial resource.
Olufemi, Abimbola and Adebayo, who are also among the 100,000 beneficiaries covered under the Oyo state health scheme, shared their experiences during a media field trip to the Agbongbon Primary Health Centre.
Olufemi, a teacher, like many other Oyo residents, had prayed for stress-free access to healthcare even before he got married. Like a dream come true, he was fortunate to be enrolled into the scheme a few months after he got married. At first, he never believed that with just N8, 000 per annum, his wife could have a successful caesarean section without paying through his nose.
“I registered about two months after I got married and the first payment was made two months after. Luckily, my wife got pregnant and gave birth and since then, I have been paying less to nothing. It may not be 100 per cent success but I am happy with the programme.”
Also, five months old pregnant mother, Abimbola Ahmed, could not help but express her joy. Ahmed says, “I paid only N2, 400 the first time I came and since then, I have not paid any other money. I am happy with the scheme. “You see many women in our community don’t have money but since the government presented free delivery, many of us have been coming. You can see that many people are here now. “I joined the scheme in March last year.
This programme is very good and beneficial because they take care of us. They give pregnant women all the attention they need. After your delivery, you would be given a bed for free”.
He also appreciated the UNICEF, for sponsoring and financing the programme.
Another beneficiary, Mr. Adebayo, said that his wife was on admission for two weeks after major surgery and was treated free, without any charge.
“My wife did not pay a kobo in this place, all tests and surgery were treated free. If they write drugs, I will go to the pharmacy and they will give me free without any charge. When it was time for us to be discharged, I was expecting to be given a bill but I did not get one. The programme is really good and live saving”, he said.
Affirming the increase in the number of patients, Assistant Record Attendant, Health Records at the Agbongbon PHC, Mrs. Adekola Atinuke, made it known to DAILY INDEPENDENT that, every month, the Centre takes 40 deliveries a month and can be more sometimes.

“In the past, we used to have 20 to 22 deliveries a month, but last month alone, we had 36 deliveries”, Atinuke said. “Last year, we had 905 pregnant women in our record. But in the first five weeks of this year alone, we have over 108 on the list already. “Although some women are still going to Traditional Birth Attendants, TBAs, the introduction of OYSIA has continued to increase antenatal uptake here and the number of other patients at the Health Centre. More women are now delivering here since they know they will not pay. At times, money can keep them away”.
Speaking, Fasan Desimola, a member of the medical team said she has 600 enrollees in her care out of which government caters for 400 while the remaining 200 are private enrollees. “It has not been easy getting people out to come and enjoy this programme, but it has given more people the opportunity to access health care,” Desimola said. “I also have a lot of pregnant women and children under five who registered free and they are being catered for by the state government. “Also, many elderly ones are here. It is easier for them to access health care here because their children can pay from wherever they are. “I have a lot of hypertensive and diabetic patients. I have never had any reason to complain. There is nothing more troubling than when you manage a patient that cannot afford the cost of treatment, as a doctor you cannot be happy.”