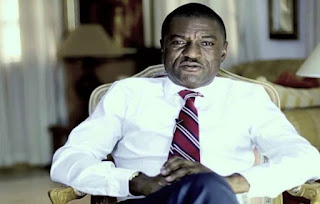 To boost awareness on the plight of the less-privileged Nigerian child and mother with malaria and bring change, Sterling Bank Plc, a leading commercial bank has partnered with Malaria, Child, Maternal Mortality Eradication (MACMME) project to produce a movie titled ‘ANAVE.’
The film which was written, produced and directed by Nicolette Ndigwe had Abubakar Suleiman, Chief Executive Officer of Sterling Bank and Frank Nweke Jnr., former Minister of Information and Communications, as co-executive producers.
Speaking at a press conference in Lagos at the weekend, Mr. Lekan Akintemi, Head of Technology and Digital Compliance, Sterling Bank, said the bank is committed to accelerating development in critical sectors of the economy including, health.
According to Akintemi, this informed its support for the production of the film.
He said; “It should not be surprising that we supported the production of Anave malaria, infant and maternal mortality advocacy movie – because it promotes health and improved access to healthcare for the most vulnerable in the society.
In with our commitment to the health sector, we are continuously developing solutions that would promote preventive health as part of our overall strategy towards making Nigeria a nation that is populated by healthy people.”
Commenting, Ndigwe explained, “Anave tells the story of an eight-year-old boy whose mother dies from malaria complications at childbirth, leaving him at the mercy of an orphanage. He ends up on the street in a quest for an education where he faces the struggles of the vulnerable poor and homeless.”
She said the movie campaign is on the need private public sector involvement in the fight against malaria, provision of basic health care, housing, education for the less privileged Nigerian, 3,000 of whom die daily from preventable diseases and about the
According to her, ANAVE parades some of Nigeria’s most celebrated artistes and actors such as Omawunmi Megbele, Aituaje Iruobe popularly known as Waje, Shawn Faqua, Seun Ajayi, Rita Edwards and many others.
She said the film would premiere before a select audience at fund-raising events in Lagos tomorrow, followed by a series of screenings to larger audiences across the country.
She explained that the MACMME project is an advocacy project which seeks to reduce the high maternal and child mortality due to preventable causes such as malaria, homelessness, hunger and opportunistic diseases.
Ndigwe wondered why the country is losing lives to sicknesses and issues that as little as N1,000 could solve, implying that most of these deaths are also fueled by poverty and lack of awareness in the general populace which is a gap that Sterling Bank desires to fill by supporting the film.
She observed that what she found most hurtful was that about 75 per cent of malaria deaths were linked to highly preventable causes such as basic health care, hygiene, homelessness and sanitation practices.