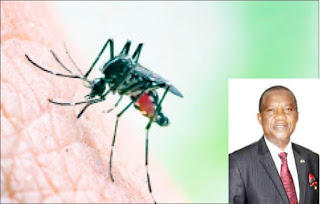 Pharm. Sam Ohuabunwa, President, Pharmaceutical Society of Nigeria, has called on the Federal Ministry of Health and policy makers to strengthen National Malaria Surveillance by incorporating reports from pharmacists operating   in community settings.
Making the call, Ohuabunwa noted that evidence currently show that most patients visits their community pharmacists first when they first suspect malaria.
“Therefore, health data reports from community pharmacists will improve data quality and resulting intervention,” he stressed.
Ohuabunwa who spoke at a press briefing to mark the World Malaria Day celebrated on April 26, 2019 whose theme is “Zero malaria starts with me,” noted that pharmacists play important roles in the management of malaria cases.
Ohuabunwa said that pharmacists are appropriately positioned in government, health value chain and in our communities to help achieve elimination of malaria.
He said that pharmacists play three roles in the fight for zero malaria – prevention, case management and policy advocacy.
“Pharmacy also advises you on the use of long lasting insecticide treated mosquito net and the use of tropical mosquito repellant. They talk to you about new device that can repel mosquitoes, counsel on general environment and lead charge to raise awareness about malaria,” he said.
The PSN president informed that Nigerian pharmacists in research are also working on malaria vaccine.
In the management of malaria cases, Ohuabunwa said that the pharmacists are actively involved in detecting suspected cases of malaria, provide rapid diagnostic tests to confirm malaria, provide appropriate pharmacotherapy using arthemisin in combination therapy in all positive cases.
“Pharmacists are involved in the referral processes where on initial presentation features of complicated malaria are already present, they are also actively involved in all value chain including discovery, synthesis, regulations, manufacturing, logistics and policy making related to anti-malaria medicines.
“These ensure that the most effective medicines are available for all Nigerians wherever they may live. Pharmacists collaborate with communities in which they are resident to improve awareness of environmental sanitation.
“They also collaborate with other health care providers to improve patient’s outcome and reduce incidents of complications and prevent parasite resistance. Pharmacist also works with policy makers to ensure adequate funding of malaria programme so that all Nigerian can have access to appropriate treatment,” he said.
He said that World Malaria Day was an opportunity for  the country to evaluate her malaria elimination programme efforts.
He then called on Nigerians to take action to eliminate malaria by cleaning their environment, get rid of stagnant water and pools, cover up gutters in residential areas and ensure that the garden is not grown.
The PSN president explained that interrupting at least three mosquito life cycles, required a concerted effort to achieve and called on the local council development authorities to coordinate and implement an environmental policy to achieve this.

He also called on other health professionals to develop quick and effective efforts to save lives especially among risk populations, children under five and pregnant women.
According to WHO 2018 report on malaria, in 2017 there were estimates 453,000 deaths from malaria globally compared with 451,000 estimate deaths in 2016 and 607,000 in 2010.
“Children aged less than five years are the most vulnerable group affected by malaria. In 2016, they accounted for 61 per cent (266,000) of all malaria deaths worldwide.
“The WHO Africa region accounted for 93per cent of all malaria deaths in 2017, although the WHO Africa region was home to the highest number of malaria deaths in 2017, it also accounted for 88per cent of the 172,000 fewer global malaria death reports in 2017 compared with 2010.”
The report said nearly 80per cent of global malaria deaths in 2017 were concentrated in 17 countries in the WHO African region and India. Seven of these countries accounted for 53 per cent of all global malaria deaths: Nigeria (19 per cent), Democratic Republic of Congo (11per cent), Burkina Faso (six per cent), United Republic of Tanzania (5 per cent), Sierra Leone (four per cent), Niger (four per cent), and India (four  per cent).
It said all WHO regions except the WHO region of America recorded reduction in mortality in 2017 compared with 2010.  The largest decline occurred in the WHO region of South East Asia (54per cent), Africa (40 per cent), and Eastern Mediterranean (10 per cent).
Despite these gains, the malaria mortality reduction rate as also slowed since 2015, reflecting the estimated trends on malaria case incidence, the PSN boss said.