Why Role Of Parents In Managing Autistic Children Is Crucial – Ndolo 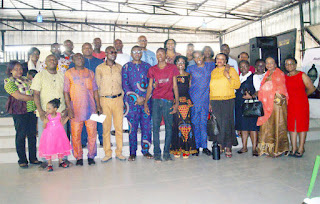 Some-of-the-attendees-of-the-Autism-Awareness-presentation-which-held-on-weekend
Autism is a simple behavioral disorder and disability that can be managed so that the affected person can connect with the society and reach their highest potential in life, according to Mrs. Dicta Ndolo, a United States-based Behaviour Analyst who has dismissed beliefs that the condition is a disease. She also advised parents of children living with Autism to break the silence by seeking the answers to their wards disability, instead of shying away, noting that would not be of help. Mrs. Dicta Ndolo who also is creating massive Autism Awareness campaign in Enugu state, told DAILY INDEPENDENT in an interview that symptoms of Autism can be identified in children through their communication, social behaviour and speech challenge, just as she admonished parents to be on the lookout for these signs. ‘Autism is a developmental, neurological disability that affects one in 87 children and for every five kids affected, four of them are boys and one is a girl’ Giving further details on health condition, she said, “Autism is a complex neurobehavioral condition that includes impairments in social interaction and developmental language and communication skills combined with rigid, repetitive behaviors. Because of the range of symptoms, this condition is now called autism spectrum disorder (ASD). It covers a large spectrum of symptoms, skills, and levels
of impairment. ASD ranges in severity from a handicap that somewhat limits an otherwise normal life to a devastating disability that may require institutional care. “Children with autism have trouble communicating. They have trouble understanding what other people think and feel. This makes it very hard for them to express themselves either with words or through gestures, facial expressions, and touch.” “A child with ASD who is very sensitive may be greatly troubled – sometimes even pained – by sounds, touches, smells, or sights that seem normal to others. “Children who are autistic may have repetitive, stereotyped body movements such as rocking, pacing, or hand flapping. They may have unusual responses to people, attachments to objects, resistance to change in their routines, or aggressive
or self-injurious behavior. At times they may seem not to notice people, objects, or activities in their surroundings. Some children with autism may also develop seizures. And in some cases, those seizures may not occur until adolescence.” She also explained, “Some people with autism are cognitively impaired to a degree. In contrast to more typical cognitive impairment, which is characterized by relatively even delays in all areas of development, people with autism show uneven skill development. They may have problems in certain areas, especially the ability to communicate and relate to others. But they may have unusually developed skills in other areas, such as drawing, creating music, solving math problems, or memorising facts. For this reason, they may test higher – perhaps even in the average or above-average range – on nonverbal intelligence tests.” She further advised parents to be on the lookout for a behaviour expert for their children who will provide help to such disabilities, reasoning that Mr. Bill Gates, the Microsoft CEO had Autism, yet he still made it to the peak of his career. “Symptoms of autism typically appear during the first three years of life. Some children show signs from birth. Others seem to develop normally at first, only to slip suddenly into symptoms when they are 18 to 36 months old. However, it is now recognised that some individuals may not show symptoms of a communication disorder
until the demands of the environment exceed their capabilities. Autism is four times more common in boys than in girls. Being an adult with Autism is not a terrible thing except the person involved was severely affected during childhood,” she said. “Autism has three main characteristics and minor ones. The main ones are difficulty in communication, difficulty with social skills and difficulty with the sensory response,” she added. She explained that difficulty in communication signifies that some of them may likely not speak or if they speak, one might not understand their pronunciations. Some may not understand spoken languages which will mean those using gestures and sign language. While some talk, but might have problem with volume, others scream, and the rest may whisper. Concerning social skills, she said that though children with Autism don’t play properly with toys, it is nothing to be ashamed of. During the awareness which was held at Bush House Arena Nza Street, Enugu on Saturday, July 6, Mrs. Dicta lamented that children get affected with Autism when they are born and don’t get help which makes them grow into an adult with autism. She went further to pleaded with parents to stop hiding their children living with Autism because some of them starve to death after being abandoned and ostracised. Many of them are classified as mentally challenged persons as a result. “Every child is a gift from God,” she stressed