Nigeria Yet To Meet Global Target In Exclusive Breastfeeding – NDHS 2018 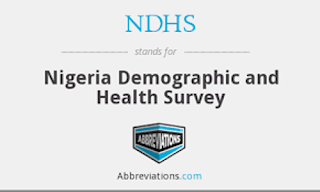 LAGOS – Nigeria is still behind the global target of 50 per cent in exclusive breastfeeding despite recording 29 per cent, the National Demographic Health Survey (NDHS 2018) new report has revealed.

The development is worrisome to experts in view of many benefits of breast milk. World Health Organisation (WHO) reports that breast milk contains all of the nutrients needed by children during their first six months of life.

Among its benefits, exclusive breastfeeding is associated with a lower risk for many early-life illnesses, including diarrhoea and respiratory infections.

Reviewing the 2018 NDHS was Maureen Zubie-Okolo, United Nations Children’s Fund, (UNICEF) Monitoring and Evaluation Specialist, said that though exclusive breastfeeding among children aged zero to six months has increased since 2013, from 17 per cent to 29 per cent, it fell short of the 50 per cent target.
Zubie-Okolo spoke during a two-day workshop in Port Harcourt, Rivers State, organised by the Child Rights Information Bureau and the Federal Ministry of Information, recently.

The World Health Assembly (WHA) has set a target to increase the global rate of exclusive breastfeeding to at least 50 per cent by 2025. To coincide with the timeline of the Sustainable Development Goals (SDGs), the WHO has extended the targets for maternal, infant and child nutrition to 2030.

Zubie-Okolo, however, added that the percentage of children who had ever been breastfed was 97 per cent in between 2008 and 2018.

Elaborating, the UNICEF Specialist said breast milk contains all the nutrients needed by children during their first six months of life, adding that it is recommended that children be exclusively breastfed in the first six months of their life; that is, they should be given nothing but breast milk.
She pointed out that exclusive breastfeeding prevents infections such as diarrhoea and respiratory illnesses and provides all of the nutrients an infant requires for optimal growth and development.

According to her, the 2018 NDHS revealed that under five mortality was 132 deaths per 1,000 live births, implying that more than one in eight children in Nigeria dies before their fifth birthday.

Similarly, she said, “There has been a slight reduction in infant mortality, from 75 to 67 deaths per 1,000 live births from 2008 to 2018. However, there has been no noticeable change in the neonatal mortality rate over the same period.”

The report also notes that childhood mortality in Nigeria remains high and that every year, an estimated one million Nigerian children die before their fifth birthday.

Based on that trend, Nigeria is one of five countries in the world with the highest number of under-five deaths.

“These surveys have been instrumental in strengthening national statistics capacities, highlighting and filling gaps in quality data, monitoring and tracking progress toward national and international development goals like the SDGs and, in identifying emerging issues and disparities among groups in societies.