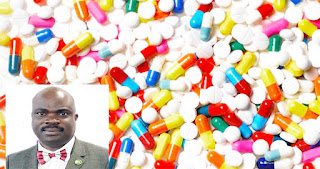 The Association of Community Pharmacists of Nigeria (ACPN) has dissociated itself from the purported meeting in Lagos on August 29, 2019 between Konga and Community Pharmacy Owners being circulated in the social media.

A release by Pharm. Adekola O. Samuel, National Chairman of ACPN, said that having consulted the Pharmaceutical Council of Nigeria (PCN), the regulator of the industry, the ACPN has confirmed that there is not any association by the name Community Pharmacy Owners.

The release read; “After due consultations with the Pharmaceutical Council of Nigeria (PCN), our regulator, we wish to clearly state that we are not aware of any association by the name Community Pharmacy Owners.”

Adekola dissociated the ACPN from the project for what he described as being shrouded in secrecy possibly for pecuniary gains.

He advised community pharmacists to call their executives for clarifications to avoid scammers who might not be representing the interests of ACPN.

He added that the ACPN was neither involved nor invited to the meeting with Konga, yet the meeting was said to be with Community Pharmacy Owners.

Part of the release read, “The attention of ACPN, the official organ representing the interests of all Community Pharmacists nationwide, has just been drawn to the record of the first Lagos meeting between Konga and Community Pharmacy Owners on Thursday, August 29, 2019 that was circulating on social media.

“After a due consultation with our regulator, we wish to clearly state that we are not aware of any association of Community Pharmacy owners. We wish to dissociate ACPN from this project shrouded in secrecy possibly for pecuniary gains. Community Pharmacists should call their executives to seek for clarifications to avoid scammers who may not be representing the interests of ACPN.

ACPN was neither involved nor invited to the meeting with Konga. Yet the meeting was said to be with Community Pharmacy Owners.

“ACPN does not endorse the acquisition of pharmacies by non-pharmacists as this is grossly unethical and against the spirit of the PCN laws guiding community pharmacy practice.

“ACPN does not endorse the part ownership of community pharmacies by non-pharmacists. We render professional service and we are not traders.”

He said the questions that ACPN members have raised among many are: “Is Konga a registered pharmacy premise? Is Konga a member of ACPN in any state of the Federation? Why would any Community Pharmacist be interested in pushing unethical arrangement of selling their pharmacies to non-pharmacist, instead of the other way round? What are the ulterior motives for arranging this secretive meeting with Konga to help the transfer of ownership and control of pharmacies by non- pharmacists? Who are the anonymous pharmacists conniving with Konga to take control of pharmacy away from pharmacists?”

Other questions of ACPN, he said are: “Are these anonymous pharmacists operating in their own narrow interests or that of bigger interest of ACPN? If it is being done in the interest of ACPN; Who gave the mandate? Could this be a connivance to betray the profession and sabotage the robust plan of ACPN to drive collaboration of pharmacies in order to keep pharmacy practice in the hands of pharmacists from one generation to another? Will the present promoters and enablers of this strange model of Community Pharmacy practice not be synonymous to interlopers working as undertaker to bury the soul of ACPN?”

The ACPN National Chairman said, “While seeking for answers, ACPN would like to reassure all members that our grand project as endorsed by NEC and AGM in Kano is being pursued with all our zeal and vigour. We should not allow saboteurs to derail our collective vision for collaboration through the Trans-Generational Pharmacy Project.”

Recall that pharmacists under the aegis of the Association of Community Pharmacists of Nigeria (ACPN) had in July made recommendations on how to redress the menace of drug abuse and misuse in Nigeria.

Adekola, at the six-day 38th Annual National Conference of the association in Kano cautioned the National Agency for Food, Drug Administration and Control (NAFDAC) on the hike in registration fees of drugs and other regulated products within its purview as well as appealed for Presidential assent of the Pharmacy Council Bill 2017.

Addressing the theme of the conference titled, ‘Tackling the Menace of Drug Abuse in Nigeria’: A Disruptive Innovative Approach, Adekola had said the ACPN and other major blocs as well as interest groups have taken the lead in bringing the challenges of drug abuse and misuse to front burners.

The ACPN boss explained that the goal is to encourage government at all levels and critical stakeholders appreciate the immensity of the aberration that confronts the country as a people.

The seasoned pharmacist said the social menace which is boosted by challenges of unemployment and under-employment of youths, and even the elderly deserves more serious handling if they shall not be held responsible for raising a new generation of drug addicts.

Reiterating pharmacists’ position at the AGM, Adekola said; “The ACPN which is a registered association by the corporate affairs commission remains committed to the letter and spirit of the AGM of its 38th Annual national Conference which insisted on normalising the chaotic drug distribution channels through a number of procedures and interventions driven by the strategic regulatory agencies involved in drugs distribution (PCN, NAFDAC AND NDLEA).

“As a very responsible organisation we cannot be seen on one hand to approbating through building structures of the greatest possibilities by the three regulatory agencies and the other reprobating by worsening the fundamental decay of indiscriminate access to medicines which internet pharmacy will only facilitate as controls to monitor the tenets of internet pharmacy today.

“For records we insist that the PCN be empowered to have manning levels through inspectors who can monitor, control and enforce existing laws as it affects all Registered and unregistered drug premises or outlets in both the public and private sectors

“NDLEA in line with its mandate should continue to take responsibility for dangerous drugs and narcotics.”

On how to redress the menace of drug abuse and misuse in the country, Adekola called on the National Assembly to see an urgent need to amend the National Drug Law Enforcement Agency (NDLEA) Act to give room for more professional engagement of registered Pharmacists in the day to day management of this very sensitive drug regulatory agency.

“Specifically, the NDLEA must be structured to have a Directorate of Consumer Enlightenment and Protection which must be headed by a registered Pharmacist because of his widely acclaimed expertise as drug expert. This directorate will be activated to champion unprecedented advocacy in consumerism with the ultimate advantage of generating a resolve to shun drug abuse by our teeming youths and other vulnerable groups in larger society. It is apparent that we contend with huge numbers of chronic drug abusers in the country at the moment,” he said.

The pharmacist said the NDLEA enabling Act of Parliament must therefore be tinkered with to establish rehabilitation centres preferably along the lines of the six geo-political zones in the country.

He stressed on urgent advocacy to actualise the listed recommendations, noting that this was the only way to catalyse a golden era in the value chain of drug distribution in the country.