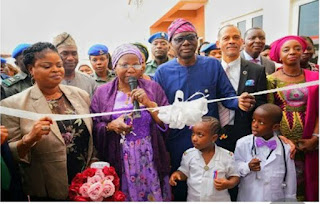 L-R: Senior Special Assistant to the President on SDGs, Mrs. Adejoke Orelope-Adefulire; Deputy Governor of Lagos State, Dr. Obafemi Hamzat; representative of wife of the President and SSA on Administration to the President, Dr. (Mrs) Hajo Sani; Governor Babajide Sanwo-Olu; Commissioner for Health, Prof. Akin Abayomi and wife of the Governor, Dr. (Mrs) Ibijoke Sanwo-Olu during the commissioning of the 149-bed Maternal and Child Centre in Alimosho General Hospital, Igando.

To ensure healthy pregnancy for women as well as safe childbirth, the wife of Nigeria’s President, Mrs Aisha Buhari has said that the zero tolerance declaration by the Federal Government on maternal deaths has yielded great results as women and children remains its top priority.

Speaking at the official launch of the 149 Bed Maternal and Child Centre, (MCC) located in Alimosho Local Government Area of Lagos State, said that the centre is currently being constructed across the country.

Aisha Buhari said that, statistically, majority of patients attending primary and public health facilities are women, hence the need for the construction of the centre.

The wife of the president who was represented by the Senior Special Assistant of the government on Administration, Dr. Hajo Sani, said, the event represented a strategic intervention between the Federal and Lagos state government in promoting the nation’s health sector.

She said, “in order to compliment what government is doing and to encourage others, i have decided to construct maternity complexes across the country. The essence of this is to ensure that women receive attentions while they are pregnant and that they deliver their babies in most hygienic environment.

“I have already constructed and furnished two maternity complexes in Daura in Katsina state as well as in Yola in Adamawa state where hundreds of women are benefiting from the facilities every week and I am therefore happy that women will benefit from the facility being commissioned today. I therefore encourage the women in Alimosho and its environ to put the landmark project to good use.”

Giving his address, the Lagos state Governor, Babajide Sanwo-Olu said the state government did not pay lip service to issue of quality health care delivery, adding that the facility would serve the population very well.

According to Sanwo-Olu, “For us as a government, what we are also doing here falls in tandem with our policy thrust of which we have christened the T.H.E.M.E.S agenda which stands for: Traffic Management and Transportation; Health and Environment; Education and Technology; Making Lagos a 21st Century Economy; Entertainment and Tourism; as well as Security and Governance, several initiatives and programmes have been implemented since assumption of office on May 29, 2019.

“The second part of the T.H.E.M.E.S is speaking about Health and Environment. We commissioned this kind of facilities in series. Just three weeks ago we commissioned a 110 Health care facility in Eti-osa now we are here. It is heart- warming and befitting,” he said.

Sanwo-Olu reiterated the commitment of his administration to work on the various indices aimed at taking people out of poverty.

Also, in her remark, the wife of the Governor of Lagos state,Dr. Ibijoke Sanwo-Olu, however commended and appreciated the Federal government for graciously building and donating the 149-bed MCC to Lagos state government through the Office of the Senior Special Assistant to the President on Sustainable Development Goals, (SDGs), Princess Adejoke Orelope-Adefulire.

Ibijoke who is a member of the medical family, stated that, “this Mother and Child Centre, targets goal three of the United Nations 2030’s SDGs agenda which stipulates good health and wellbeing for all.

“Thus, this MCC in Alimosho will complement other existing healthcare facilities in this area and other parts of the State and will go a long way towards reducing maternal mortality, ending epidemics and ensuring universal access to sexual and reproduction health care services.”

The Governors wife said efforts are also in top gear to complete two other MCCs in Badagry and Epe, with more to follow.

She added that the facility is another significant milestone in the effort of the government to reduce incidence of maternal and child mortality and help promote the wellbeing of women and children.

In his speech, the Commissioner For Health, Prof. Abayomi Akin said, “this project is geared towards improving the health indices of our citizens by commissioning this second Maternal and Child Centre at Alimosho with the aim to the attainment of the overall goal of achieving Universal Health Coverage for the good of the people of Lagos.

“The facility will also to reduce to the barest minimum the unacceptably high morbidities and mortalities in our pregnant women and children especially the under-five children.”

According to the Commissioner, “it would be important at this juncture to give some demographic perspectives and statistics to understand how important it is for us to be here commissioning this gift from the Federal government of Nigeria to the people of Lagos State and understand why Alimosho requires a second MCC.

“The Alimosho Local government because of its size was divided into six. The Local Government and five Local Community Development Areas (LCDAs). Alimosho General Hospital and MCC serves the 3.5 million people of Alimosho and a total of six million from surrounding areas, which is bigger than many cities and even some countries in Africa and around the world.”

Dr. Akin said, the hospital attends to an average of 45,000 patients a month across 14 different clinics and admits over 4,000 patients per year, adding that, it sees 14,000 pregnant mothers and children per month and an average of 250 babies are born every month.

He pointed that in 2018, it performed 1,300 caesarean sections, stating that the existing MCC has 70 beds, 44 cots, and 10 incubators with the necessary support services.

He lamented that the unfortunate causes of death in children under five includes: sickle cell anaemia, malaria, chest infections and diarrheal diseases, while causes of death in new born are linked to: difficulty in breathing, infections, jaundice or yellow eyes, prematurity and birth defects, stressing that, these are mostly preventable.

The Commissioner said, the addition of a new MCC will reduce referrals to other health facilities and provide the much desperately needed space to treat our mothers and children.

“Across Lagos State, it is estimated that for every 100,000 pregnant women, 555 of them die at childbirth.And for every 1,000 live births, sadly 45 don’t live to make it to their first birthday.So as you can see, we in Lagos with our zero tolerance still have a long way to go.”

Akin said, the state government has constructed, equipped, furnished and commissioned eight Maternal and Child Centres across the State in Isolo, Ikorodu, Ifako-Ijaye, Amuwo-Odofin, Gbaja (Surulere), Ajeromi, Eti-Osa and Alimosho. There are two other MCC’s that are at different stages of completion in General Hospital Badagry and Epe.

This MCC has been specially designed to provide integrated healthcare for the mother and child, adding that more staff will be deployed to complement the services being provided by the 60 medical doctors and 137 experienced nurses and other cadres of health workers currently working at the Alimosho General Hospital.

He stated that, “at this facility we currently have a shortfall of 25 doctors and 25 nurses to ensure its full functionality. The Lagos state Ministry of Health is working towards ensuring we recruit and train these staff to complement the existing ones.”