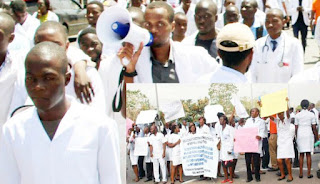 Joint Health Sector Union and Assembly of Healthcare Professional Association (JOHESU/AHPA) has condemned and rejected the approval of the concessioning of facilities in public health institutions in the country by the Infrastructure Concession Regulatory Commission (ICRC).

JOHESU/AHPA which constitutes 95 per cent of health workforce in the country said concession of facilities in public health institutions would compromise the lives of the vast majority of Nigerians and compound their existing problems.

JOHESU/AHPA in a release by its Chairman, Biobelemoye Joy Josiah, described the concession approval as a hurricane that would speed up a “descent to a bottomless pit of fruitlessness and un-productivity in healthcare.”

It therefore urged the Federal Government to immediately stop the concessioning of Teaching Hospital facilities to private profiteers. It as well advised other health professionals who have been promised that concessioning of health facilities would not affect them to be wary and discern wisely.

The ICRC is an agency of the Federal Government of Nigeria responsible for the development and implementation of Public Private Partnership (PPP) framework for the provision of infrastructure services.

The union contended that the reality in economic terms was that the majority of the people live in poverty and squalor and so cannot access or afford safe and efficacious drugs even in public facilities as it stands at the moment.

“Any attempt to concession facilities in public health institutions will compromises the lives of the vast majority of Nigerians and compounds their existing woes. As a matter of fact, concessioning, privatisation or mutilated PPP agenda at this point in the evolution of endeavours in Nigeria is a direct invitation to morbidity and mortality.  The only option that works in the maximum interest of Nigerians at this time is to allow healthcare remain a social welfare service to consumers of health,” it warned.

JOHESU/AHPA advised the Federal Government to admonish the profiteers and greedy entrepreneurs jostling to take over public health facilities to be responsible enough to build their own world class health facilities like their counterparts do in the global arena.

JOHESU/AHPA said it has continued to collate evidence based data at the local and international levels on the desirability or otherwise of concessioning, privatisation or mutilated PPP agenda and after a very critical evaluation of the various issues, wished to further posit that the Guild of Medical Directors, an influential Medical Stakeholder, has continually insisted that over three quarters of Health Facilities in Nigeria’s Health Sector are private concerns.

“In order words, if 75 per cent of the facilities are already Private Sector driven entities without commensurate impact, then compelling a shift/orientation of Federal Health Institutions (FHIs) which are public sector facilities to become private facilities will not fundamentally impact on the Health System. What the Health Systems needs is a complete redress that takes care of the in-depth corruption in the management of the FHIs, lopsided composition of the Boards of Management (BOM) of the FHIs, appointment of competent CEOs for the FHIs as well as a responsible benefit package for all cadres of the healthcare workforce in the various FHIs.

This, it said, expressly defeats the goals and objectives of the National Drug Policy 2005 which advocates accessibility, affordability and efficacious drugs in our health system.

“At a time the life expectancy of a Nigerian is 54.5 years because of prevailing challenges in health, the situation will only get worse because more Nigerians will not have access to affordable and efficacious drugs. In similar vein, life expectancy will be jeopardised when the cardinal goal of National Health Policy which also seeks accessible and affordable Healthcare services is truncated,” it said.

A scenario whereby presumably state of the art health facilities cannot be afforded by consumers of health makes them inaccessible contrary to the goals of the National Health Policy.

“Recent Government decision to increase VAT from five per cent to 7.2  per cent is bound to further worsen escalating cost of Healthcare in Nigeria. The cost of care services including drug, dressings, medical consumables, equipment and related items are bound to increase Health Services exponentially by about 20 per cent in the months ahead. This increase will directly become applicable in FHIs in the event any of these FHIs get into the hands of concessionaires,” it contended.

JOHESU said that from a global perspective, a report of the Public Services International Research Unit (PSIRU), the Business Faculty, University of Greenwich, London, U.K titled Financing Healthcare: False Profits and the Public Good gives a most incisive and revealing insight into the un-endless demerits of Concessioning and Privatisation arrangements in Healthcare.

“The report says financial consolidation, escalating healthcare costs and demographic changes are placing universal public health care under increasing pressure. In this environment, the idea that the Private Sector is more efficient, effective and better able to fund healthcare than the public sector has been promoted.

“The reasons for the efficiency and effectiveness of the public provision of health are not complex. Administrative costs of public insurers are routinely and dramatically lower than private insurers. Public systems, with a single payer system in the form of a government or state run agency, produce efficiencies of scale and are better able to control costs. This is the damning result from the global healthcare environment where whatever we do around here stems from since the concept of healthcare is not and will never be an indigenous professional plan.”

It said the United Kingdom which has always been adjudged an international benchmark in a workable version of Social Health Insurance and Health System is beginning to fail because of the increasing influence of private profiteers. More private sector engagement in health is surely beginning to hurt the U.K. economy in the last few years. The involvement of Private Finance Initiative (PFI) in the health system of the U.K. has increased the cost of health by a factor of three.

“This development is hinged on the reality that Public Systems better control over-servicing and ensure the most appropriate form of treatment. Conversely, private providers also pay more to borrow, exploding the myth that they bring more and cheaper financing to healthcare.

“Despite widely held beliefs to the contrary, funding universal public healthcare systems through general taxation is more efficient, creates better healthcare outcomes and is more equitable than the private alternatives.

“Finally, the JOHESU/AHPA makes bold to say the Federal Government should be decisive in taking a position that the profiteers, greedy entrepreneur and their collaborators in government circles jostling to take over public health facilities in Nigeria be responsible enough to build their own world class health facilities like their counterparts do in the global arena.

“The tragedy of the ICRC approval of the concessioning of 22 FHIs is one of the tragic fall-outs of the Economic Team of the FG between 2015 and 2019. In Lagos State where the privatisation of healthcare was kick-started by these same dramatis personae, the experiment has failed,” JOHESU said.

To substantiate its position, JOHESU/AHPA said that at the Federal level, the commercialisation of the pharmacy facility of the UCH, Ibadan, collapsed and the concessioning of Garki Hospital, Abuja, has never been a value added decision.

“Today, that facility is a shadow of itself, as it has become inaccessible to wide cognoscenti of consumers of health in the Abuja area.

“JOHESU/AHPA, therefore strongly urges the Federal Government to immediately stop the concessioning of Teaching Hospital facilities to private profiteers… Private profiteers will naturally get rid of the block of health professionals whose wages consume 60 per cent of the entire health workforce in Federal Health Institutions (FHIs) even when they constitute less than five per cent of the entire personnel in the health sector,” it said.