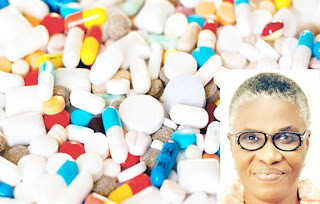 In commemorating the 2019 World Pharmacists Day, Pharm. Bola Adeniran (FPSN), the Chairman, Pharmaceutical Society of Nigeria (PSN), Lagos Branch, has drawn attention to the need for a critical appraisal of the Drug Distribution Channel, evaluation of the increasing tendencies to worsen sales and dispensing of drugs via Internet Pharmacy and attempts by the government to concession Health Facilities in FHIs in line with the theme of this year’s celebration, “Safe and Effective Medicines for All.” CHIOMA UMEHA reports:

Pharm. Bola Adeniran, Lagos PSN Chairman, has posited that to realise the objective of this year’s celebration, there is need to take a holistic review of the drug distribution channels, the challenges of Internet Pharmacy Practice in Nigeria and the drawbacks in concessioning of health facilities. World Pharmacists Day, September 25 highlights the value of the pharmacy profession and impact on improving health authorities, other professions and the media, as well as to the general public.

Pharm. Adeniran said that for many years, the state of drug distribution has remained a lip talk. She also said the reality today is that government has made little or no progress in the quest to sanitise pharmaceutical distribution channels.

She said, “If we decide to call a spade a spade, the Federal Government actually needs to call a state of emergency in the Drug Distribution bracket of Nigeria’s health sector to redress the unending cycle of unproductivity.”

She explained that under former President Olusegun Obasanjo administration, a Presidential Committee was set up with requisite stakeholders to redress the ills of drug distribution with some seriousness. This was active until former President Goodluck Jonathan finally approved the popular National Drug Distribution Guidelines (NDDG) with major recommendations to open new vista in drug wholesaling.

The NDDG underscored the urgent need to seal all existing Open Drug Markets (ODM) in line with existing Acts of Parliament, she added.

Pharm. Adeniran further lamented, “Four years after the first deadline for full implementation of NDDG was announced by Mr. Linus Awute, then Permanent Secretary and Acting Head of the Federal Ministry of Health in 2015, government has not been decisive on the closure of the obnoxious drug markets.

She continued, “In fact, the operators at the deadly Onitsha Head Bridge Market are on record to have resisted monitoring and control by violently attacking a team of NAFDAC Inspectors who routinely visited that market on an enforcement drive, without any accruing sanctions till now. This is one of the aching points in drug distribution remains with Patent Medicine Vending in our clime.

Adeniran regretted that Patent Medicine Vending (PMV), which was meant to be a stop-gap-mechanism in service provision to people in underserved areas, has eventually become a huge stumbling block for practising pharmacists in Nigeria.

She further noted that it has become an endless means of easy access to all categories of medicines from Over-the-Counter (OTC) drugs to Potentially Inappropriate Medications (PIMs), Prescription-only Medicines (POMs), dangerous drugs and narcotics which are never monitored because of severe logistics challenges the regulatory agencies suffer.

She reasoned that since healthcare is a globally inclined endeavour which promotes best practices, a structured healthcare and pharmacy practice in line with international practice is expected to be in place.

However, Adeniran regretted, “What we see more and more is that NGOs and international donors continue to encourage scenarios whereby more abuses are perpetrated against the very people they set out to assist.

She condemned every policy which allows persons other than Registered Pharmacists and other trained personnel like Pharmacy Technicians dabble into the professional responsibility of sales and dispensing of drugs.

According to her, this jeopardises the aims and objectives of the National Drug Policy 2005 which is inclined to delivering safe, efficacious and affordable drugs to the people of Nigeria.

“It is therefore very imperative to call on the Federal Government that the reforms we need with Patent Medicine Vending must focus on allowing Pharmacy Technicians who are part of global pharmacy workforce to take care of Patent Medicine Vending in rural communities or other areas where service delivery is lacking in pharmaceutical services,” she said.

Adeniran said that because of obvious weak regulations, every effort aimed at ensuring a free for all disposition in the sales of drugs by people who do not have formal training as professionals or sub-professional cadre would only serve to boost the worsening incident of easy access to drugs.

She said that this has dire consequences, such as boosting drug misuse and abuses as well as drug faking which all continue to combine to devalue the Gross Domestic Product (GDP) and potential of the pharmaceutical sector in the quest for national development and growth.

“Consequently, the PSN Lagos State wishes to call for a Presidential Committee on Drug Distribution which shall be headed by an experienced Registered Pharmacist not encumbered with the bureaucracy of the Public Service. The Committee should have representatives of PCN, NAFDAC, PSN, ACPN, PMG-MAN, NIROPHARM and a key official of the Presidency not below the rank of a Director,” she said.

Adeniran said pharmacists under the aegis of PSN, Lagos would align with the Association of Community Pharmacists of Nigeria (ACPN) to be committed to the objectives of the 38th annual national AGM conference of the Community Pharmacists. The aim of the AGM is to normalise the chaotic Drug Distribution Channels through specific procedures and interventions by the strategic regulatory agencies involved in drug distribution (PCN, NAFDAC and NDLEA).

She said, “As very responsible professionals, health providers cannot be seen on one hand to be approbating through building structures of the greatest possibilities by the three regulatory agencies and on the other reprobating by worsening the fundamental decay of indiscriminate access to medicines which Internet Pharmacy would only facilitate as Nigeria does not have regulatory controls to monitor Internet Pharmacy.

“The major demerit of Internet Pharmacy is that it is largely faceless which makes it a major source of fake and substandard products even at global level. It is therefore logical to imagine that embracing this concept in our largely unregulated Drugs Distribution space will only spell more doom for our country,” she said.

Pharm. Adeniran restated the position of Community Pharmacists thus:“That the Pharmaceutical Council of Nigeria (PCN) be empowered to have manning levels through inspectors who can monitor, control and enforce existing laws as it affects all registered and unregistered drug premises or outlets in both the public and private sectors.

“That NAFDAC in line with its safety margin be allowed unfettered access to regulate the quality of drugs in pharmaceutical premises while also ensuring sanity in drug quality control and assurance at all designated ports of entry (airports and seaports) in the best interest of consumers of medicines.

“That the National Drug Law Enforcement Agency (NDLEA) in line with its mandate continues to take responsibility for dangerous drugs and narcotics. Pharmacists, however, call for a restructuring of the NDLEA Act to ensure that a Directorate of Consumer Protection which shall be headed by a registered pharmacist is created in line with the undisputed status of pharmacists as experts in drug matters in our quest to tackle drug abuse and misuse.

Drawbacks in concessioning of health facilities

On concessioning of health facilities, Adeniran said, “About 14 years ago when the Obasanjo Government introduced its version of Social Health Insurance dubbed NHIS, we thought we could attain Universal Health Coverage, particularly because the National Health Act was structured to enhance Social Health Insurance through a one percent consolidated funding (first line deductions from Federation Account), but poor management and inexperienced drivers have ensured that the NHIS is another project that is dead-on-arrival because coverage after almost 15 years is less than two percent (1.72 percent).

Whatever remains of the Health Services is about to be sent a death knell because contemporary reports confirm the FG through its rampaging Infrastructure Concession Regulatory Commission (ICRC) has now approved concessioning of 22 FHIs in Nigeria.

“Healthcare in a country like Nigeria where poverty is endemic should ordinarily be a social welfare inclined agenda, but this last bastion and window for healthcare through public facilities for the downtrodden would be handed over to private profiteers if President Muhammadu Buhari does not stop the thieves in high places who are bent on handing over guaranteed markets in the public sector to private profiteers and doomsday merchants who paint rosy pictures of what the involvement of entrepreneurs in Healthcare would bring to bear on health services in the public sector,” she said.

Adeniran urged President Buhari to order a critical evaluation and investigation into the fortunes of Garki Hospital, Abuja, which was handed over to a concessionaire some years ago.

To achieve the goals and objectives of safe and effective medicines for all, the PSN therefore recommended the Enforcement of NDDG, she said.

She said that emphasis should be placed on strategies that would guarantee closure of drug markets and its movement to the approved Coordinated Wholesale Centres (CWC) in seven city centres across the country.

“Work out a sustainable reform in the business of Patent Medicine Vending by paying particular attention to the strict applicability of statutes in the enforcement window currently available in the pharmaceutical sector.