Research has proved that family planning provides couples with the invaluable means of limiting and spacing the number of children they want through the use of contraceptive methods.

Not only that, they believe that effective family planning not only checks population explosion, but also help to reduce child and maternal mortality in the society.

Family planning enables a woman to have a relaxed mind, lessens family financial burden and builds a happy family.

However, despite these and many more advantages Nigerian women of childbearing age are denied their reproductive health rights due to religious and cultural issues, especially in Lagos State, a recent survey has shown.

The National Demographic Health Survey, NDHS 2018 attributed the poor access to family planning services to the negative attitude of husbands and which is feared to have contributed to the increase in unmet need for contraception by women of child bearing age from 16 percent in 2013 to 19 percent in 2018.

Mrs. Patience Ihejirika, the Family Planning Manager at the Ijora Primary Health Care (PHC) Lagos, told a media group, Media Advocacy Working Group (MAWG), that there were many reported cases of men not allowing their wives to take up family planning in the PHCs.

Specifically, she said that some of the challenges had to do with men and consumables in that many of the women who want to use family planning services could not do so due to disapproval by their husbands.

“There are instances where a woman will come today to get a contraceptive, tomorrow she is back at the centre demanding to remove it because her husband was complaining. Many of them are forced to remove the contraceptive by their husbands.

“Sometimes they claim their husbands are expecting more children, and when they are not forthcoming, they will begin to ask questions. Some do it without the consent of their husbands.

“It is a common problem here. At least, three out of 20 women in this centre would come back to say remove it because of their husbands,” Mrs. Ihejirika reported.

She explained that even when their husbands were invited to the clinic for counselling, they would still insist on removing it because they claim it is against their culture and religion.

She also complained that dearth of consumables was hindering smooth running of family planning services in the PHCs in Apapa area of the state.

Mrs. Ihejirika also fingered paucity of funds as one of the greatest challenges they were having in the prosecution of family planning programmes in the state. According to her, only N10, 000 is released to each PHC that attends to between 40 and 100 women in a month for family planning by each local government.

She explained, “In a month, we buy all sorts of things like gloves, bleach, and detergents among others. Family planning is free and the N10, 000 is not regular every month. We however try to avoid telling our clients to pay for the consumables.”

She advocated an upward review of the money to N50, 000 monthly per PHC monthly to meet the cost of consumables, especially during the Maternal and Child Health Week, during which they spend a lot to procure injectibles such as depo, sayana press, oral contraceptives, pills, microgynon, excrutien, implants and IUCDs as well as condoms for male and females.

The most common complaints the women have about contraceptives, according to Ihejirika, is bleeding which she said discourages many to change to other methods or to stop using any method.

Corroborating her views, representative of the Medical Officer of Health, Apapa, Dr. Kehinde Ososanaya and Dr. Folashade Iyanda, also confirmed that there had been a steady rise in the number of women accessing family planning and that lack of funding for consumables remained a challenge. They called for a statutory allocation for consumables for better service delivery. 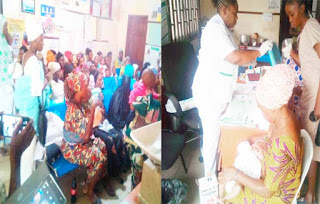 Some-nursing-mothers-at-the-family-planning-unit-of-Ijora-Primary-Health-Care-PHC-Lagos-during-the-visit-by-the-Media-Advocacy-Working-Group-MAWG-Lagos.
Many of the women who attend the Primary Healthcare Centre (PHC) advocated increased education and sensitisation of the male folk on the benefits of family planning and disabuse their minds on the preconceived erroneous notion about the programme.

One of them, Mrs. Sakinat Azeez narrated her ordeal the first time she tried to initiate a discussion about family planning with her husband.

Sakinat said the response was discouraging and frightening. She shared her experience with DAILY INDEPENDENT at one of the Primary Health Centres in Ijora.

“My story is not a pleasant one. I felt like the ground would open and swallow me. My decision to take up family planning was just to put an end to my misery,” she said.

Sakinat confessed she was not ready to have more children, therefore her desire to prevent unintended pregnancy made her raise the issue with her husband. But she was severely interrogated and indicted for being promiscuous. “He reminded me of our religion, I was neither given opportunity to say something or even explain why we need family planning. I was almost beaten so I left the bedroom in annoyance,” she added.

Also, Daramola Adeoye, 37, had the same experience, but was smarter and determined to obtain a family planning method despite all odds. The mother of four with no meaningful livelihood said she desired family planning after a devastating miscarriage.

But, her husband did not support her idea. In desperation, Daramola decided to visit the Primary Health Centre in her area in Lagos. There, she was counseled and given a contraceptive of her choice for a five-year period.

As the years rolled by, her husband became concerned that she was not getting pregnant and began to ask questions. “I opened up and told him I have adopted family planning. He became angry and demanded I must remove it,” she narrated.

However, despite all the pleas by the family planning providers at the health centre, Daramola’s husband insisted they must remove it. She was forced to remove it.

Daramola’s case is common among women in Lagos today. Bola is in her second marriage with four children, with three from her first marriage. She spoke to DAILY INDEPENDENT at the Ijora Primary Health Centre, Apapa, where she came to take up family planning without her husband’s consent.

Although educated, Bola’s husband is opposed to family planning. “I came here voluntarily to do it. I did not tell my husband because he would not agree. I prefer the one of five years. Then when it expires I can bear two more children. Our husbands and indeed every man need to education on the importance of family planning so that they will support us,” Bola said.