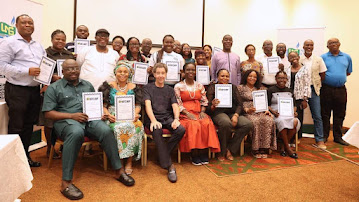 Participants, facilitators and funders at the just concluded NLNG Change Your Story workshop facilitated by the Journalism Clinic in Lagos.

"The NLNG Change Your Story workshop has equipped me to use digital tools to do people-oriented reporting, particularly as a journalist saddled with the responsibility of reporting technology developments." This was the view of Prince Osuagwu, one of the participants who spoke to Sunday Independent at the just concluded NLNG Change Your Story workshop facilitated by the Journalism Clinic in Lagos.

Osuagwu was one of the lucky participants in the three-day workshop tagged #NLNGTellYourStory, a multi-media session designed to build skills and bridge the knowledge gap between traditional and digital journalism practice.

Participants at the just-concluded training were taught the use of new digital tools in mobile and visual storytelling that drives positive change in the society.

They further learned how to shoot and edit high-quality videos with smartphones, create stories at a speed that grabs attention online and on social media, as well as explore mobile-friendly story forms and useful digital tools that make their job easier and raise their professional profile. 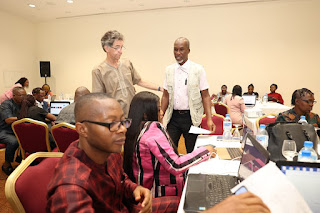 Dan Mason, an internationally-acclaimed digital and data journalism trainer and Pelu Awofeso, Nigerian  Researcher and Author  during one of the sessions at the recently concluded NLNG Change Your Story workshop in Lagos

The session which featured Dan Mason, an internationally-acclaimed digital and data journalism trainer saw the participants reliving beautiful experiences about how the training has improved the quality of their work.

Some said that they were happy with the new skill and digital tools, which will enable them to tell stories for a variety of audiences, particularly the digitally savvy young generation, as well as aid to stop the spread of fake news on the internet.

Others thanked Mason for the tutorials on the use of canvas to tell stories visually; use of the ABC (Angle, Background, and Close-up) method in taking photographs, Cap cut, and free video tool in digital reporting.

For instance, the visibly excited Adaku Onyenucheya said, it's "good to meet new people and learn new digital skills to practice journalism effectively in Nigeria. A big thanks to @nigeriaLNG @Clinic4Journos and @masondan for this privilege."

Falade Onaolatomorin, another ecstatic participant, remarked, @nigeriaLNG @Clinic4Journos @masondan Thank you for an amazing learning session. It was refreshing to learn new ways of telling engaging stories and promoting the future of journalism.

Chioma Obinna said, "I really had a swell time at the NLNG Tell Your Story Digital and Communication Workshop #NLNGChangeYourStory held at the EKO Hospitals and Suites, Lagos."

It was a win-win thing for participants, facilitators, and funders who expressed delighted to host a fresh cohort of Nigerian journalists for the 2022 #NLNGChangeYourStory hands-on mobile journalism training from Wednesday, June1 to Friday, June 3.

The Journalism Clinic tweeted after the training on its handle, @clinic4journos, "And so after three activity-packed days, we minted a new cohort of mobile-first, audience-focused and multimedia-minded journalists in Nigeria, thanks @nigeriaLNG. We trust that this training will impact their reporting, going forward."

Welcoming participants to the training, Mason earlier noted that the three-day practical training would help journalists and communicators master new digital skills and show them how to approach storytelling from a different angle that drives positive change.

The delighted trainer, said, "Great to be back on the road with #NLNGChangeYourStory in #Lagos. Mobile, digital journalism that makes a difference, now in its seventh year! Working with a fantastic group of journalists and always a pleasure."

He explained that today, the emphasis is shifting from hitting the media space with loads of details to mobile-first, audience-focused, and multimedia-minded journalists in Nigeria.

He said with new digital skills, the audience would want to subscribe to the news channels to get more value, greater access, understanding, and a variety of stories and events.

Every Story Is About People

Mason stressed to the eager participants, “Even though Nigeria’s solution is different from every other country, the undoubted thing that has been found is the total focus on the audience, individuals, and how to make them part of the network.

“Statistics show that people still respect traditional mainstream journalists, but the younger demographics respect influencers who know how to network. “Journalists are influencers because that is their job. You need to go on social media platforms and start building that network to suit your beats.

“Visual media is important to get your story across to your audition through social media platforms. You need to build your own influence and networks as the world has moved digital,” he added.

He explained the importance of journalists answering questions that audiences are asking while crafting stories. Mason, however, urged the participants to build their profile on social media as a communication professional at the heart of the network, noting that it is very important for people to know them.

The noticeably pleased international trainer highlighted that the trainees in Nigeria have proven to be mobile-first, audience-focused, and multimedia-minded journalists as a result of the training. 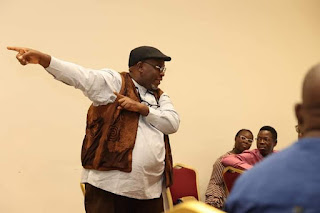 The Coordinator, Journalism Clinic, Taiwo Obe, speaking to journalists said, "In this journalism business, we don't care about our people. I keep saying, a few of you people who have worked in your newsrooms, we do not care about the people we are covering. I say to you, always reverse positions with the people you are covering. That is exactly what we have done here.

"So, when the story breaks, go to Twitter now, what are the questions they are asking. They are asking the same question that you should be asking. But then, our newsrooms is so wired that they just go to the next story. Meanwhile, those who are not ‘trained’ to find answers to those questions will come up with all kinds of speculations, rumours and all that.

"Those of us who are trained, we move on to another story. So when you complain nobody is reading you, it’s because you've not responded to them, you're not putting people first. 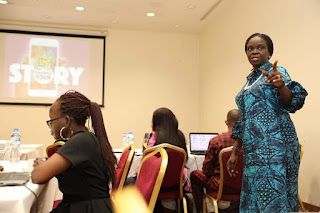 Earlier, Anne-Marie Palmer-Ikuku, Acting Manager, Corporate Communications and Public Affairs, Nigeria LNG Limited (NLNG) while welcoming participants to the training tasked them to pay attention in order to learn, assuring that they will learn something new.

She said, "There is always something new to learn, we urge you to pay attention and if you don't understand anything, you can call the attention of the speaker. Everything you pick up here, you're going to find extremely useful," she added.

Pelu Awofeso, a Nigerian Researcher and Author said it was "great to be assisting @araisokun and @masondan at the #NLNGChangeYourStory training, hosted @Clinic4Journos for journalists from a wide selection of media houses across Nigeria."

The sponsorship of Journalism Clinic which began seven years ago in 2015 with only 10 journalists has seen hundreds of practitioners improving their work, said Obe, Visioner, Journalism Clinic.

He advised the 2022 NLNG Change Your Story participants, "Let me tell you something, you are not here for your editor or publisher. This is the best gift you can get – self-development.

"This is my teacher I got a commonwealth fellowship to go to the UK to learn this. So, really to thank Nigeria LNG, it is a gift for life," Obe added, referring to Dan Mason as his teacher.

The vision of The Journalism Clinic, based in Lagos, Nigeria, is to raise the next generation of first-rate journalists in Nigeria.

Obe said, "Our customised training room is appropriately called, The Hub and it’s open for public, commercial use, as well."

The Journalism Clinic was founded by Taiwo Obe, better known as TO, a Commonwealth Professional Fellow and Fellow of the Nigerian Guild of Editors. He also founded in 2011 the EverythingJournalism Group on the professional network, LinkedIn, to promote best practices in journalism. He teaches at The Journalism Clinic and facilitates workshops on digital storytelling at the School of Media and Communication, Pan Atlantic University. To show rather than tell, Obe also practises what he teaches.

He called for partnership from Nigerians and organisations that are passionate to give back to the society to help make more journalists in the country first-class.