Osinbajo And Tinubu Are At Odds Over A Muslim-Muslim Ticket 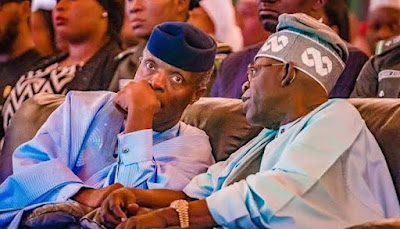 The selection of Kashim Shettima, a former governor of Lagos State, by ALL Progressives Congress presidential candidate Asiwaju Bola Ahmed Tinubu to run on a Muslim-Muslim ticket has put the former governor on a collision course with Vice President Yemi Osinbajo, who reportedly warned that such an adoption would not bode well for the party or the nation.

Yesterday, a Presidency source revealed that Osinbajo had voiced strong opposition to the selection of a Muslim-Muslim ticket.

The source added that the VP opposed a Muslim-Muslim ticket in 2014 even before what ultimately turned out to be his own eventual nomination as VP. "Professor Osinbajo is opposed to this thing announced on Sunday, and his objections are well known both to the party and even the flagbearer himself," the source said.

Then, he allegedly told Tinubu that a Muslim-Muslim ticket would only marginalize Christians. Later, after emerging as the front-runner for the APC, President Buhari shared that viewpoint and declined offers to name Tinubu as his running mate.

According to the credible source, Osinbajo recently advised APC leaders and Tinubu to steer clear of an unbalanced ticket, claiming that doing so would be both unworkable and risky.

The source stated: "The VP explained that a balanced ticket is indisputable in terms of logic, fairness, and justice. A false choice is presented by the claim that merit should take precedence over a Muslim-Christian balance. There is no either/or situation. A balanced ticket allows you to receive all the merit you desire.

Anything less than a balanced ticket, according to the vice president, causes unneeded tension and exacerbates some of the nation's fault lines. A balanced ticket, however, undoubtedly sends the right message.

Following the announcement on Sunday, there have been new discussions of political realignments, as some other registered parties are reportedly preparing to form a new coalition with Vice President Osinbajo. This is seen as an opportunity to present a credible and religiously-balanced option in the upcoming presidential election. A meeting to examine this possibility, according to a source, is currently being planned.

According to the source, "APC may have shot itself in the foot with this kind of ticket, and the tensions that have arisen in the party and the nation since the announcement are a bad thing."