The country is currently faced with a situation, whereby 60 per cent of all blood donations are from commercial donors and 30 percent from family replacement. Minister of Health, Professor Onyebuchi Chukwu, observed that 1,130,000 units of blood are collected annually in the country through the various types of donations as against 1,336,000 estimates of blood units required. The deficit, according to the Minister, has resulted in numerous preventable deaths especially among women and children and people living with certain diseases. 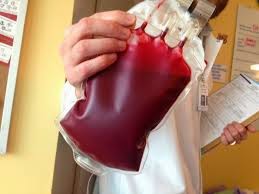 A member of the Lagos State Blood Transfusion Committee (LSBTC) Mr. Solomon Eka, made the call during a blood donor drive organised by the LSBTC in conjunction with the State Water Corporation, maintained that as long as Nigerian opinion leaders are opposed to blood donation, the country will remain far from attaining the required blood units for survival of patients. Eka said: “Presently there are some opinion leaders that do not support blood donation. If these opinion leaders are meant to have a change of attitude, and also demonstrate by donating blood, their followers will also follow suit. So we need the opinion leaders to drive the campaign in the communities.

To let people know that blood donation is not risky and is not having any negative effect.” In his lecture tagged; ‘Importance of Voluntary Blood Donation’, Eka explained that regular blood donation also helps refresh an individual’s blood. He said the State blood donation drive has helped discover hidden diseases in many persons walking around with blood disorders without knowing. Encouraging cultivation of the culture of donating blood every three months, he explained that not every donated blood is useable. ‘It is not everybody that can donate, you must attain certain criteria before you donate, which include; you must be 50 kg and above, blood pressure must be normal, PVC must at an acceptable level to avoid any unforeseen crisis. Only healthy people aged 18 -65 are likely to donate blood,’ he added.

Chief Matron, Lagos State Water Corporation Staff Clinic, Aderoju Olusola, who observed that the exercise was part of their monthly health talk aimed at inculcating healthy living into the staff of the corporation. Olusola, who agreed that most Nigerians are afraid to donate blood out of fear, said donors stand to gain refreshed blood as well as prolonged life. Voluntary blood donation also provides support for persons in need of blood, accident victims, cancer patients, sickle cell anaemia patients and pregnant women in labour among others.

This story was published in Newswatch Times on September 26,  2013.
http://www.mynewswatchtimesng.com/nigeria-faces-dearth-voluntary-blood-donors/
Posted by Chioma Umeha at 17:43