With   four   companies ready to begin production of anti-retroviral drugs in Nigeria, there is hope that more People Living with HIV (PLWH) in the country will now have access to anti-retroviral (ARV) drugs for treatment of HIV/AIDS.

The Joint United Nations Programme on HIV and AIDS (UNAIDS) recently, said that the issue of accessibility of ARV will soon be a thing of the past when its production begins in Nigeria.

Over 300 protesters under the aegis of Network of People Living with HIV/AIDS (NEPWHAN)   shut the office of the National Agency for the Control of AIDS (NACA) last November,   alleging that they were unable to access anti-retroviral drugs.

They further alleged that there was ongoing withdrawal of financial support to HIV/AIDS by external funding partners.

As early as 6am, the protesters had besieged the major entrance to the office of the Director-General of NACA, Prof. John Idoko, and prevented him and other staff from entering.

They came with bed sheets and other sleeping materials, an indication that the protest would be serious.

The spokesperson for NEPWHAN, Mr. Sumaila Garba, had told journalists that they would lock up NACA office for 25 days.

Among these protesters were young men and women, carrying placards with different anti-government inscriptions.

Reacting, Idoko assured the protesters that NACA was looking into their grievances to ensure that the issues were resolved amicably.

But, there are indications that the Joint United Nations Programme on HIV and AIDS, would through new arrangements encourage local production of ARV.

Speaking for UNAIDS was its Country Director,   Dr Bilali Camara, who confirmed this in an online report, adding that the agency would enter into partnership with telecommunication companies to ensure that basic information about HIV/AIDS were advertised. 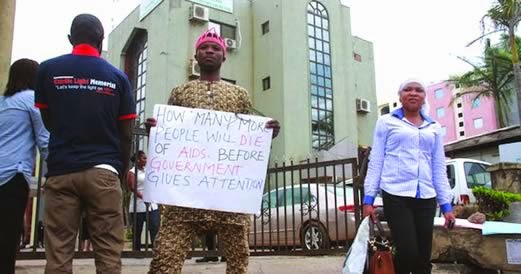 The UNAIDS Country Director, expressed optimism that the local production of anti-retroviral drugs would enable people access treatment at a cheaper rate.

He added that it will also help those on life treatment, stressing that people live on treatment for 15 to 30 years.

“We have commenced negotiations with four pharmaceutical companies; the companies have been certified by the World Health Organisation (WHO) for the general manufacturing practices,” he said.

The UNAIDS official also said that WHO would support the conduct of the prequalification processes, “adding, “as soon as that is concluded they will commence the production of the anti-retroviral drugs in Nigeria.””

According to Camara, many West and Central African States would benefit from the production, because nobody is producing the drugs in this region.

He added that beside Nigeria, seven million other people may need the drugs for treatment from West and Central Africa, which shows that there is good return of investment to the companies.

In related development, Camara said UNAIDS would enter into partnership with telecommunication companies to ensure that basic information about HIV/AIDS was advertised.

He noted that this would assist to further increase access to treatment to 101 million people in Nigeria are targeted.

The Country Director said: ““We want to give more people access to basic information on HIV/AIDS. We want our target to know how to prevent mother to child transmission of HIV where and how to get HIV/AIDS related services.

“So that in the next few years we have more people accessing the services which many result into many infants born HIV positive mothers and born infants without the disease,” he said.

According to him, “if we do it correctly it will effect on the overall HIV transmission in the country.”

Also, Camara, lamented that the high cost of female condoms was affecting its availability and distribution in Nigeria.

Camara, observed that people shy away from promoting female condoms because it was not readily available.

He added that “non-availability is a major challenge of female condoms now. “It creates deception and opposite effect when one promotes what he or she cannot provide.”

The Country Director said the UN Population Fund (UNFPA) and few other partners were importing the condoms but supply was inadequate.

According to him, the Department for International Development (DFID) is already into social marketing of condoms and will promote both the male and female condoms as well.

The UNAIDS focal point said the female condom was made of thin, strong plastic called polyurethane.

He added that the newer version, which costs less, is made of a substance called nitrile.’’

This story was published in Newswatch Times on February 5, 2015.
http://www.mynewswatchtimesng.com/nigerias-gradual-step-towards-anti-retroviral-drugs-sufficiency/
Posted by Chioma Umeha at 22:28