How LUTH allowed my wife to die over N1.3m medical bill – husband

• No, we did our best for her under the circumstance – LUTH Ag CMD

Perhaps, if the newly signed National Health Act which provides for free medical care for pregnant women and under-five children has become enforceable, Mrs. Folake Oduyoye who died at the Lagos University Teaching Hospital (LUTH) from complications due to a caesarean section procured at a private hospital, Midas Touch Clinic, Aguda, Surulere,Lagos, could have been prevented.

According to her husband, Adeyemi Oduyoye, 35- Folake Oduyoye died on December 13, this year at LUTH, Idi-Araba, Lagos, due to negligence of LUTH occasioned by the inability of the family to pay over N1.3 million cost of medicare incurred from over one month that his wife was hospitalized at the Intensive Care Unit (ICU) of LUTH where she was referred to after infections from the CS led to sepsis that required another surgery.

Adeyemi lamented that the hospital detained and did not allowed his wife to seek help elsewhere, even as she was abandoned without attention by the hospital staff when her condition deteriorated because he was unable to settle her medical bills. “They did not treat her; they left her in the hospital; they did not allow me to take her for good treatment; they depend on money; they don’t care for human life,” alleged Mr. Oduyoye who as a printer could only pay N300, 000 out of the bill.

However the management of LUTH has denied the allegation of negligence over Mrs. Odudoye’s death. The Acting Chief Medical Director of LUTH, Prof. Chris Bode who made the clarification at a news briefing on weekend in Lagos, said that Oduyoye’s death was ‘regrettable’ in spite of all the efforts and ‘not because of negligence.’

Bode said that Oduyoye would have died but for the efforts of the healthcare team who kept her alive in spite of the ongoing strike by health workers.

‘’This lady came into LUTH in critical condition, unconscious and infected from CS performed in another hospital. She underwent a major operation at which plenty of pus was evacuated from her abdomen.

‘’She underwent a tracheostomy, creating a hole on her neck to enable her breath and stay alive. 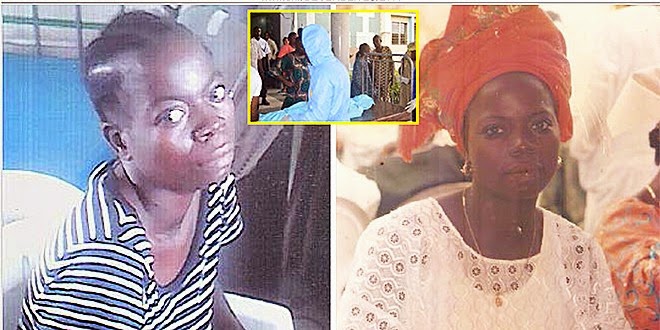 ‘’She was admitted into the Intensive Care Unit, with multiple organ failure, for one month she was on ventilator, a machine which was breathing for her.

According to him, the family paid a total of N300, 000 and requested that a total bill of N1.2 million be waived.

‘’She was discharged on November 9, when she was deemed fit to go home, while her husband was sourcing for money to pay hospital fee.

‘’Her relations, who wanted the hospital to let them walk away without paying for the services she received, abandoned her.

‘’The husband requested to pay in installments of N15, 000 per month and this was accepted, but he could not bring anyone to stand as guarantor.

‘’The conditions of Oduyoye became suddenly poor and she died of pulmonic complications on December 13.”

Civil society groups have since risen to condemn of avoidable death of Mrs. Odudoye for maternal related causes due to lack of money to pay her medical bill.

A human rights organisation, Women Advocates’ Research and Documentation Centre (WARDC) which on Friday petitioned the management of the LUTH over the death of, Oduyoye, lamented that it was one of the many deaths of women that are preventable.

The Executive Director, WARDC, Dr. Abiola Akiyode, decried the insensitivity of hospitals in Nigeria said that high cost of health care in Nigeria is preventing women from accessing quality deliveries in hospitals.

“This is very common when it comes to the issue of maternal mortality in Nigeria. Women don’t want to go to the hospital because they know that when they give birth and they cannot afford the huge amount of

The Executive Director of Women’s Consortium of Nigeria (WOCON), Chief (Mrs.) Bisi Olateru-Olagbegi said: “The situation is very sad for this country because when you have a situation where if you don’t have

money you are not entitled to standard health, It is just terrible”.

“ Is it a crime for a woman to produce children? We say we have high mortality rate in this country, we are the second largest in the whole world and we are supposed to be getting funds from all kinds of people, all kinds of agencies to assist us in this. Can’t they use that kind of funds to prevent the loss of lives? She questioned.

Meanwhile, Development Communications (DevComs) Network and its partners on the NOTAGAIN Campaign has called on the government to ensure effective implementation of the new National Health Law to help women and children have access to quality health care.

This story was published in Newswatch Times on December 25,  2014.
http://www.mynewswatchtimesng.com/luth-allowed-wife-die-n1-3m-medical-bill-husband/
Posted by Chioma Umeha at 23:21