Benola fetes inmates of Hearts of Gold at Christmas

As a show of love and in the spirit of sharing, a non-profit organisation, Benola, A Cerebral Palsy Initiative, has donated relief materials consisting of food items and toiletries to Hearts of Gold (HOG) Children’s Hospice. Making the presentation weekend, Femi Gbadebo, Founder/CEO, Benola, A Cerebral Palsy Initiative, who led the delegates to HOG Children’s Hospice at Plot 75 Alhaji Masha Road, Onilegogoro, Surulere, Lagos state, explained that Benola’s visit was part of his organisation’s Christmas outreach efforts to identify with indigent children who are living with disabilities. 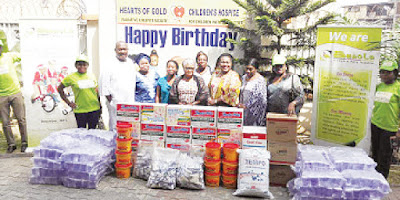 Gbadebo expressed optimism that the items given to them would go a long way in helping the beneficiaries as well as experience the warmth and sharing identifiable with the Yuletide season.

Newswatch Times reports that the organisation, founded and co-founded by Gbadebo and his wife, Alaba, is committed to change and progress for persons living with Cerebral Palsy. Their mission is to strive for their inclusion into society in order to ensure that they and those who care for them live the best possible life under the peculiar circumstances in which they find themselves.

According to Benola CEO, the visit to HOG which was the second time in the year, was targeted to fulfill his organisation’s mission to improve lives of people with disabilities.

Gbadebo who further said that the visit was quite fulfilling added that Benola look forward to more interactions with Hearts of Gold in the near future.

Responding, Mrs. Laja Adedoyin, the Founder, visibly excited that Benola was visiting the home for the second time in the year while conducting the team round the hostels to see amazing array of children with very unique malformations, thanked them.

Hearts of Gold or HOG as it is popularly known has been in existence since 2003 and remains the first and only children’s hospice in Nigeria that caters to the increasing number of abandoned and orphaned children aged between six months to 13 years who are suffering from a vast range of severe congenital, physical and mental disabilities. For children with terminal and other life-limiting and life-threatening illnesses the hospice offers comfortable, caring and loving environment. They also provide palliative and respite care services.

This story was published in Newswatch Times on December 24, 2015.
http://www.mynewswatchtimesng.com/benola-fetes-inmates-of-hearts-of-gold-at-christmas/
Posted by Chioma Umeha at 20:59