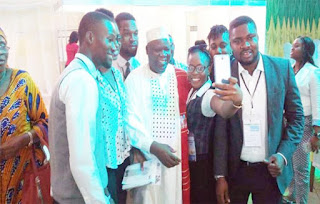 Pharm. Ahmed Ibrahim Yakasai, President of the Pharmaceutical Society of Nigeria (PSN),  weekend, renewed his call for selfless service and  inter-professional collaboration among healthcare professionals, even as he tasked his members to see pharmacy practice as service to mankind.
The PSN President who made the call while commissioning the foundation laying of the Pharmacy Resource Centre (PRC) in River State,  Yakasai,  described it as a legacy project of the Rivers State Branch of PSN.
He counselled the state branch to ensure that the centre is accessible to other professions and public for use, describing pharmacy practice as service to mankind.
The PSN President also reiterated the need for pharmacists to continuously collaborate with other members of the healthcare profession as no one profession can effectively work alone for the benefit of the served, the patients.
The PSN President further stressed on the need for all pharmacists to unite to ensure the growth of PSN in the state, particularly the speedy actualisation of the PRC project.
He thanked the Pharmacists in Rivers State for the support shown him as the President of the state and for making the state branch so reputable such that it becomes a must visit for those aspiring to lead the national body.
The PSN boss however appealed to colleagues to set aside tribal and religious sentiments in their choice of a leader.
He counseled the pharmacists present to choose a leader with the fear of God and the interest of the people at heart. He pledged his willingness to be available and support the PSN even after his handover later in the year.
Speaking at the occasion, Pharm. Adewale Oladigbolu, the Chairman of PSN Rivers state,  described the successes achieved on the PRC project as a dream come true revealing his excitement at the growth of PSN over the past 26 years of his residence in the state.
He however applauded the support of all past leaders and members of the PSN in the state who have been instrumental to the successful growth of the PSN till date.
In his remark, Dr. U.N.O. Uwaga, a former Chairman of PSN in the state and former National President of PSN, lauded the project and stated his commitment towards the success of the building of the PRC.
He also enjoined the PSN leadership in the state to device good strategy to continuously raise funds so as to ensure steady advancement of the project.
In his address at the site just before performing the task of the day, the PSN President commended Pharmacists in Rivers State for their vibrancy and extolled the leadership prowess of the state Chairman, Pharm. Adewale Oladigbolu, MAW.
He praised the initiative of the project and affirmed that it was in line with the visions of his administration to inspire the erection of legacy structures in the various branches of PSN as well as among her technical groups.
He further urged pharmacists in the state to actively support the project so that it can be completed within the shortest possible time.
On their part, the leadesrhip and members of the Pharmaceutical Association of Nigerian Students (PANS) of the Faculty of Pharmaceutical Sciences, University of Port Harcourt described Pharm. Yakasai as a phenomenal personality and a rare gem.
They expressed great delight meeting with the PSN President and commended his laudable achievements.
Speaking on behalf of PANS Uniport, Ms. Chinaza Rejoice Chigbo, the leader of the students delegation at the Pharmacy Week activities and Vice President of PANS Uniport,  commended the hospitable disposition of the President, as he freely chatted and took pictures with them.
Chigbo further praised his sterling leadership skills which have united and promoted the PSN and set the society on the trajectory of greater progress.