Family Planning: Making Childbearing A Sweet Experience, Not A Tragedy 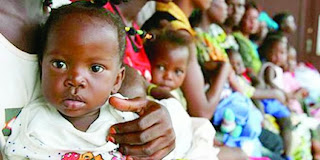 Recently, the news of a husband of a 35-year-old woman, Mrs. Queen Udekwe, based in Benin, Edo
State, who previously had a set of twins absconded after she was delivered of triplets made the rounds in the media.
The report has it that her husband fled immediately he discovered the children through the result of a scan conducted while his wife was still pregnant and vowed not to return home.
Several reactions greeted the development with many Nigerians condemning the action of the escapee husband. Some schools of thought reasoned that the birth of the triplets is a divine blessing and not a curse.
Therefore, they saw it as an act of wickedness and ingratitude to God for the man to abscond from his family. Some others, who reacted differently to the situation, said, it was a sign of high fertility rate in the couple.
Whichever perspective one decides to view, the issue throws up high fertility as one of the main causes of overpopulation problems.
The case of Udekwe’s family is only one sad example of how childbearing which is supposedly a sweet experience turns to a tragedy. There are uglier media reports of consequences unplanned pregnancies, uncontrolled births, and overpopulation.
Some couples have committed suicide simply for this reason. Recently, a man reportedly committed suicide after his wife gave birth to a new baby in Delta State.
According to media reports, the man killed himself by hanging after his wife delivered a baby through caesarean section, and was charged N15, 000.
It was gathered that he didn’t have the money hence he decided to kill himself.
Some women also commit suicide or abortion due to unplanned pregnancies and births, those who survive the abortion, often done by unskilled personal risk giving birth to children with deformities.
Others even abandon their child in odd places like the gutters, even toilets.
These are just a few examples of social problems of high uncontrolled childbirths which ultimately lead to overpopulation in any country.
However, studies have shown that this is preventable through the use of contraception.
Overpopulation is an undesirable condition where numbers of existing human population exceed the carrying capacity of the earth. This is mainly because of high fertility levels.
Currently, one of Africa’s problems is extremely the rapid population growth rate that makes it extremely difficult for governments to supply the needed social and economic programmes to improve quality of life.
For example, the total population in Nigeria was estimated at 191 million people in 2017 and a net increase of about 14, 000 people (21,000 births and 7,000 deaths) daily or about five million annually.
In 1960, Nigeria had 45.1 million people.
The United Kingdom, on the other hand, had a population of 52.2 million people in 1960 and was estimated at 66.2 million People in 2017, according to the latest census figures.
Although the UK had more people than Nigeria in
1960, Nigeria has about three times more people compared to the UK in 2017.
Between 1969 and 2019, Nigeria’s population grew by 267.4 per cent at 54.7 million people, while it has now increased to 201 million this year.
Nigeria’s population grew at an annual average growth rate of 2.6 percent in the last 10 years.
However, the World Health Organisation (WHO) defines the Total Fertility Rate (TFR) as the average number of children a woman would have if she survives all her childbearing (or reproductive) years.
Women are fertile from the age of 15 to 49.
Nigeria’s average TFR is rated between 5.5 and 5.7 children per woman which is higher than the African average of 4.7 children per woman.
With this figure, Nigeria is a lead contributor to Africa’s position as the region with the highest TFR, while Europe has the lowest TFR of 1.6 children per woman.
Health experts recommend family planning as a tool to check Nigeria’s burgeoning population.
Population growth can be a blessing to a nation if it is at par with economic growth, but Nigeria’s 201 million populations are outpacing economic growth by 0.63 per cent. This was the position of economic analysts.
Declining high fertility is often a blessing as it brings multiple positive consequences for human welfare and society.
After all, nation-building is by the people and for the people.
There is, therefore, the need to balance the reproduction and production capacities of the citizenry through effective policies and programmes with the welfare of the people as the paramount goal.
Healthy people are more productive while unhealthy, malnourished, stunted, poorly skilled people consume more than they produce.

This article was adapted from the Media Advocacy Working Group Family Being Column in Leadership Newspaper
Posted by Chioma Umeha at 17:36