Pharm. (Mrs.) Adeniran Bolanle F.O., Chairman, Pharmaceutical Society of Nigeria (PSN), Lagos State Branch, has made a case for appointment of a Presidential Committee on Drug Distribution to sanitise the chaotic drug channels in the country.
Speaking at the opening ceremony of the PSN Scientific Week at the Pharmacy Villa, Ogudi GRA, Lagos on August 22, 2019, Pharm. Adeniran said the call had become necessary because drug distribution had for long continued to be grounded in vacillations and had been at the whims and caprices of the vicissitudes of life which have almost snuffed life out of it.
She said that the reality today is that “we have made little or no progress in the quest to sanitise our distribution channels.”
“If we decide to call a spade a spade, the Federal Government actually needs to declare a state of emergency in the drug distribution bracket of our health sector to redress the unending cycle of unproductively.
“Even when the Pharmacy profession is famous as probably the most regulated endeavour in the land with legislations that are as old as over 132 years 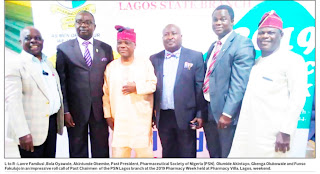 (Pharmacy Ordinance 1887), it has amounted to zero impact,” she said.