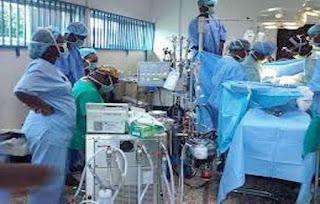 Health Writers Association of Nigeria, (HEWAN) has applauded the appointment of health professionals, Dr. Osagie Ehanire as the new Minister of Health and Senator Adeleke Mamora, his Minister of State by President Mohammadu Buhari.

HEWAN, which is a group of health journalists, however listed seven key areas that must be urgently addressed by the new Ministers to revive the nation’s battered health care delivery system.

In a  statement signed by the President and Secretary  of the association, Chioma Obinna and Lucy Osuizigbo respectively, the journalists hailed the appointment, describing it as “putting the right peg in the right hole,” saying this would bring the needed change to the nation’s health sector.

The group urged the new ministers to urgently focus their attention on key areas of the nation’s healthcare delivery system which have been neglected over the years and urgently.

These include; Implementation of Primary Health Care (PHC) policies and adequate funding of the PHCs; Providing healthcare services for the elderly; Improving laboratory services to address problem of medical negligence and misdiagnosis.

“Today, there is no gainsaying the fact that the task of a minister of health is a difficult one following the myriads of challenges bedeviling the sector, ranging from poor funding, huge disease burden, population explosion, poverty and high maternal mortality, among others.

“However, as stakeholders in the Nigerian health sector, we are constrained to state that the newly appointed ministers understand the system, the challenges and bottlenecks – as one of them worked closely with his predecessor, Prof.  Isaac Adewole, the immediate past minister,” the statement said.

While noting the new Minister’s pledge to overhaul the secondary and tertiary health institutions in the country to reduce medical tourism, the journalists said the seven listed priorities must be urgently addressed by the ministers to revitalise the nation’s health care delivery system.

The association submitted that the nation’s disease burden would drop drastically if the ministers could make primary healthcare canters more viable and recommended that the minister should continue with the 10,000 primary health centres project across the country that was initiated by his predecessor.

“There is an urgent need to put in place measures to address the healthcare needs of the elderly and retirees in the country, because old age comes with some unavoidable associated ailments of which they cannot afford to manage on their own,” the statement further said.

HEWAN also noted that many laboratory facilities in the country are currently ‘moribund’ and urged the minister to revitalised them for better treatment outcomes “as medical laboratory remains the bedrock of medical treatment,” the statement read.

It added; “There is the need for improved efforts to reduce maternal and child mortality and morbidity, which have continued to be on the increase.  Also, there is the need to investigate and prosecute cases of negligence in the hospitals to serve as deterrent and build confidence in the health system.”

On the need to stop the constant wrangling among health workers, the journalists said; “Paying attention to the inter-professional rivalry in the public health sector should be among the first steps by the new health minister. There should be zero tolerance for discord in the sector.

“As a matter of necessity without prejudice, the age-long inter- and intra-professional rivalries, discord, acrimony, and crisis that have always thrown the Nigerian health sector into unending and perennial discord should be tackled. This has always been described in some quarters as ‘irreconcilable differences’ and ‘cold war.’

“What this has brought to the Health Sector is retrogression, stagnation, motion without movement, etc. It has eroded patient-centred practices, (which is) openly demonstrated in public health institutions.  This has gone unabated for years. Patients have suffered the consequences in no small way. This has greatly led to the loss of confidence in our Health Sector too.”

“A 2017 poll by the Nigerian Polling Organisation (NOI) found that over 90 per cent of medical doctors in the country intend to seek employment opportunities abroad because of low job satisfaction, poor remuneration and high deductibles from their salaries,” the statement further said, urging the minister to ensure that the problem is properly addressed during his tenure.

HEWAN further declared that Nigeria would not be able to achieve Universal Health Coverage if health insurance remains optional as it is currently being implemented and therefore called on the new health minister to make the scheme mandatory and functional.