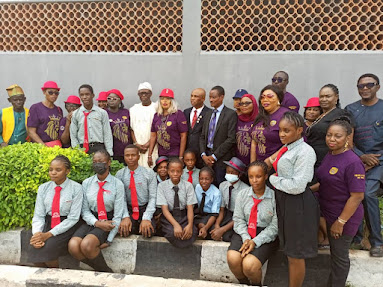 Members of Maryland Royal Lions Club and students and staff of National College, Gbagada, Lagos State, at the event.

Due to the lack of basic health facilities in many schools, the Maryland Royal Lions Club has reaffirmed its commitment to addressing the Water, Sanitation, and Hygiene (WASH) situation in public schools by renovating 16 toilets in National Collage, Gbagada, Lagos State.

The Club, which also commissioned a block of classrooms for the school that it repainted, criticized the lack of WASH, among other facilities, in Nigeria.

Lion Kayode Oshinuga, District Governor of Lions Clubs International, 404B2 Nigeria, who performed the inauguration yesterday, said the projects were part of the Club's efforts to improve society and contribute to the Sustainable Development Goals (SDGs).

This is in keeping with UN Sustainable Development Goal 6 (SDG 6), which aims to ensure universal access to and sustainable management of water and sanitation, especially as the globe approaches the 2030 SDGs deadline. Water and sanitation are essential for human and environmental health. The 2030 UN Agenda recognises the centrality of sanitation and hygiene in the progress of other sectors of the economy, including health, education, and poverty reduction.

Indeed, SDG six, which prioritizes universal access to WASH, is seen as a vital driver of economic growth, as well as a way to harness existing investments in health and education.

According to Oshinuga, members of the Lions Club are always looking for methods to improve people's lives and address the needs of institutions, families, the less fortunate, and others in society, which aligns with the SDGs.

Despite being a new club, the District Governor praised members of the Maryland Royal Lions Club for taking on the project and pushed them to do more to help the disadvantaged in their town.

He urged them to stick together and work as a team, saying the district will help them achieve their goals in any manner possible.

He also charged the members with conducting a vigorous membership drive.

Also addressing at the ceremony, Lion Abiola Hotonu-Bababunmi, president of the Maryland Royal Lions Organization, said the club chose projects after conducting a needs assessment of the school, and that the club will continue to maintain the facilities.

She also expressed gratitude to the school administration for dedicating a block of classrooms after the club and promised to see to the block's upkeep on a yearly basis.

According to Hotonu- Bababunmi, it was a pivotal occasion in the club's short history of two years. "We unveiled the block which was dedicated to Maryland Royal Lions Club by the school authorities," she said. "We inaugurated I6 units of renovated toilets, newly painted block of classrooms (two-story building)"

"This was followed by an award ceremony that recognized 'Supportive District Governors (DGs), Fund Raising Donors, and Outstanding Members' in three categories. It had been a whirlwind of a day.

"We would like to express our gratitude to our DGs, guiding lions, District chairperson, and other prominent lions for accepting our invitation. She went on to say, "This is our second year."

Lion Ayo Yemisi Jaiyeola, Charter President of the Club, in her remarks at the event, said that the association has mapped out strategies to partner with other institutions and organisations to make society a better place.

The vice principal of National Collage, Gbagada, Mr. Ewata Olufemi, thanked the club for the interventions and promised that the projects would be properly maintained.