Over 110m Nigerians don’t use toilets


Studies have shown that 90 per cent of diarrhea cases in children under five are related to unsafe water, sanitation and hygiene, and reduction in open defecation can significantly reduce the incidences of diarrhea. A new release from United Nations Children’s Fund (UNICEF) has established a synergy between sanitation, children’s health and protection of the environment. The statement which was to mark the World Environment Day linked sanitation to the health of children and protection of the environment.

Open defecation causes contamination to water bodies, and is a serious threat to public health, especially during flooding. “We know that by improving sanitation, we can improve child survival as well as the environment,” the UNICEF release said. Research has also shown that it is possible to improve the sanitation situation in the country, especially in rural areas by engaging the communities through a Community Led Total Sanitation (CLTS) approach. Recommending the Community Led Total Sanitation approach, the UNICEF release said it is a process of engaging with the community members ranging from individuals to schools and traditional leaders and empowering them to address their sanitation situation by ending open defecation, and the use of toilets constructed by locally available materials. 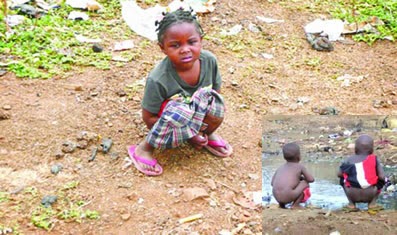 Testimonies to improved public health and a clean environment are common in the Open Defecation Free (ODF) communities. UNICEF partners with relevant government ministries, departments and agencies, NGOs, donors such as European Union and UK Aid to support implementation of CLTS in 30 states of the country. Consequently, there are more than 4,000 ODF claimed communities with over 2.5 million inhabitants now using toilets. Going by Unicef figures, this implies that about 110 million Nigerians do not use modern toilet facilities.

With continuous support from governments and other partners in scaling up this approach, more Nigerians will live in open defecation free communities. Although current sanitation coverage is low at 31 per cent, successful models like the CLTS approach have already demonstrated that it is possible to achieve quick progress in access to sanitation. Experts believe that the country can still make substantial progress towards attaining the MDG sanitation specific target, with the right prioritization of resources, political will and collective efforts. The country has already demonstrated its commitment by successfully hosting the Presidential Summit on Water in February 2013. “Ending open defecation also means saving the lives of thousands of Nigerian children dying annually from preventable water and sanitation related diseases” says Jean Gough, UNICEF Nigeria Country Representative.

This story was published in Newswatch Times on June 8, 2013.
http://www.mynewswatchtimesng.com/over-110m-nigerians-dont-use-toilets/
Posted by Chioma Umeha at 23:31