An expert has said that Nigeria can generate over $500 million yearly from shea nut butter and sesame oil. Stating this was former project 172 coordinator, Nigerian Export Promotion Council (NEPC), Mrs Omowunmi Osibo, who maintained that  the country has the capacity to increase its 336,000 metric tonnes of shea butter production per year and create jobs.

She spoke during a training organised by  National Agency for Food and Drug Administration and Control (NAFDAC) for traders, exporters and enforcement officers on the World Trade Organisation (WTO) / Standards and Trade Development Facility (STDF) Project 172. Speaking on the theme, ‘Robust System For Safer Products And Exports Of Sesame Seeds And Shea Butter’, she said a larger percentage of the product was being smuggled to neighbouring countries, adding that the Federal Government should shift its attention to the sector to generate more revenue. 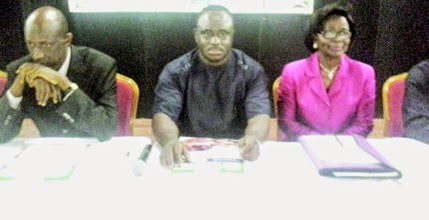 NAFDAC Director-General, Dr Paul Orhii said his agency was drafted into the project monitoring group (PMG) as a collaborator on safety and quality chain values to ensure safety and regulation of the product. He said the programme was in conformity with Mr President’s transformational agenda, stressing the need for a non-oil agricultural-based trade.

Orhii said training will enhance the export of shea nut/ butter and sesame seeds, adding that the aim was to inform participants on the trade and regulatory requirements of the production, exportation and sales of the products.

This story was published in Newswatch Times on August 31,  2013.
http://www.mynewswatchtimesng.com/nigeria-can-generate-500m-shea-butter-sesame-export-expert/
Posted by Chioma Umeha at 17:06