As the world counts down to 2015, experts are anxious over the increasing rate of mother-to-child transmission (MTCT) of HIV in Lagos State. The State is one of the 12 States, in addition to the Federal Capital Territory (FCT) and it accounts for 70 per cent of the country’s burden of MTCT of HIV.

To eliminate MTCT of HIV in line with Millennium Development Goals (MDGs) number six, there is urgent need for the State to increase efforts, if it must meet the 2015 deadline.

Data from the Lagos State Bureau of Statistics confirmed that with a population of 22 million, Lagos, with a HIV prevalence of 5.1, is one of the 12+1 States that account for 70 percent of the nation’s burden of children born with HIV based on the 2010 National HIV Sero – Prevalence Sentinel Survey.

In view of this, the State government has commenced a campaign to accelerate the Prevention of Mother-to-child Transmission of HIV (PMTCT) aimed at reducing maternal death in the State.

It is against this background that the UN health agencies are supporting the State government to convene the high-level meeting of women decision-makers in the State and other critical stakeholders to identify their roles in eMTCT and maternal deaths.

Under the new initiative, the State is therefore collaborating with United Nations Children’s Fund (UNICEF) United Nations Joint Programme on HIV and AIDS (UNAIDS) United Nations Population Fund (UNFPA), and other relevant stakeholders, to catalyse high level support for eMTCT of HIV and maternal deaths through the mobilisation of strategic stakeholders, including women of influence.

Further, it was gathered that UNAIDS is committed to revolutionising HIV prevention policies and practices that will ignite policy makers, opinion leaders and community gate keepers to focus on populations and programmes that will make a difference attaining zero new infections.

One of such programmes is the elimination of vertical (mother-to-child) transmission of HIV and the reduction of AIDS-related maternal death by half in 2015. This mandate is clearly in line with that of UNAIDS “3 zeros” target of zero infections, zero AIDS-related deaths and UNFPA: delivering a world where every birth is safe and where every woman is treated with dignity/respect.

Projected population figures for Lagos State in 2012, showed 1,060,225 women got pregnant in that year. At an HIV prevalence of 5.1 percent, about 54,071 pregnant women are living with HIV approximately one-third of whom would, in the absence of any intervention to prevent mother-to-child transmission of HIV, pass on the virus to their babies. 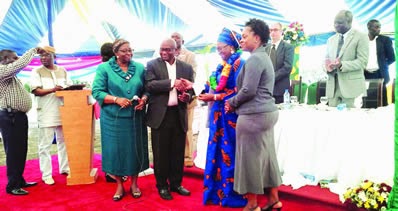 This translates to 16,468 preventable HIV infections among infants in the State in 2012 alone.

With a maternal mortality ratio of 555/100,000 live-births, Lagos State has a burden that is higher than the national figure of 545/100,000 live births, a development that negates UNFPA’s mandate of a world where every birth is safe and every child is born free of HIV.

The goal of the new initiative is to improve the demand for quality PMTCT services and to encourage healthy timing and spacing of pregnancies.

Against this background, Wife of the Governor of Lagos State, Mrs. Abimbola Fashola has called for accelerated action and sustained commitment on the part of all stakeholders especially vast majority of grassroots women in the drive to eliminate mother-to-child transmission of HIV.

“It is noteworthy that the State Government has not relented in its response to this challenge through free preventive mother-to-child transmission (PMTCT) services; increase of service delivery points from 66 in year 2012 to 312 in 2014 and various strategies aimed at encouraging pregnant women to attend ante natal clinics in the primary health care centres close to them”, Fashola stated.

She added that the Lagos State government has continued to build capacities of health workers, provide needed test kits, consumables and drugs with support from implementing partners stressing also that more PMTCT sites are being activated.

Adeshina however noted that it is regrettable that in spite of these efforts, access to PMTCT and family planning services by pregnant women remains poor. She therefore stressed the need to help protect pregnant women who are HIV positive to bear children that are HIV free and also be in stable health to look after these children.

This story was published in Newswatch Times on October 30,  2014.
http://www.mynewswatchtimesng.com/lagos-moves-to-stop-mother-to-child-hiv-transmission/
Posted by Chioma Umeha at 23:53