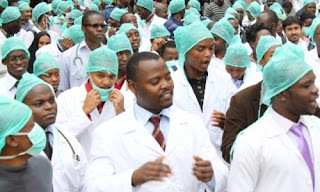 Governor of Osun State, Rauf Aregbesola, on Thursday, February 18, 2016, commended members of the state branch of Association of Local Government Medical Officers of Health in Nigeria for demonstrating understanding of their duties by committing themselves to saving lives.
Governor Aregbesola gave the commendation while receiving the association at Government House, Osogbo.
He, however, chided doctors in the state’s employ who are currently on strike, describing the boycott of work as a betrayal of their Hippocratic Oath.
The governor said, unknown to many Nigerians who have heard only the doctors’ side of the story, they collected six months’ salaries without doing any work.
He challenged them to tell the world whether they did not collect their salaries up to September 2015 when they went on strike.
?On the other hand, Aregbesola lauded the association of local government council doctors for their active service and commitment to the generality of the people of the state.
He stated that the local government health workers were not only the bedrock of any state’s healthcare sector but also the proverbial stone rejected by the builder, which turned out to be the cornerstone.
?He however lamented the industrial action of doctors at the state level for more than 11 months, saying, but for the active commitment to service of members of the association and other medical personnel, the state’s health care system would have been compromised.
?Governor Aregbesola restated how on assumption of office, he changed many existing traditions such as the date for payment of salaries, leave bonus, increased car loans, increased housing loans and a host of other pro-workers initiatives.
On his part, Fabiyi Samson, chairman of the association, said primary health care remained the bedrock of any state’s health system and the governor should be commended for what his administration has done on the primary health care system.
Samson disclosed that Osun was second to Lagos in the provision of sound health care system in the country.
According to him, primary health care holds a strategic position in the health care ladder, as more than 75 per cent of the populace is attended to at the primary level.