IVF: What Are Test Tube Babies?

By Chioma Umeha
In vitro fertilization (IVF) is the most common and most effective type of assisted reproductive technology (ART) to help women become pregnant.
The IVF procedure involves fertilizing an egg outside the body 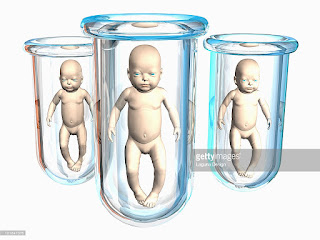 , in a laboratory dish, and then implanting it in a woman’s uterus.

In a normal pregnancy a male sperm penetrates a woman’s egg and fertilizes it inside her body after ovulation – when a mature egg has been released from the ovaries. The fertilized egg (now an embryo) then attaches itself to the wall of the uterus (womb) and begins developing into a baby. This is known as natural conception.
However, some women are unable to become pregnant through natural or unassisted conception and have to undergo fertility treatment to become pregnant.
If less expensive fertility techniques do not work, some women may decide to opt for IVF. According to the American Society for Reproductive Medicine, about 1% of U.S. infants are conceived through IVF. To date, IVF has contributed to approximately 5 million births.
Example of IVF
IVF has been used since the late 1970’s. On 25 July, 1978, the first test-tube baby, Louise Brown, was born. Robert Edwards and Patrick Steptoe, who were both responsible for the birth, are considered to be the pioneers of IVF.
In 2010, Robert Edwards was awarded the 2010 Nobel Prize in Physiology or Medicine “for the development of in-vitro fertilization”.
First IVF baby using next generation DNA sequencing born – in July, 2013, an American couple had the first IVF baby to be born as a result of next generation DNA sequencing, a new way of screening embryos that improves IVF success rates and significantly reduces the cost of treatment. DNA sequencing technology helps doctors screen embryos created by IVF to identify those most likely to lead to successful pregnancies.
IVF – The procedure
IVF techniques may differ depending on the clinic, but usually involves the following steps:
IVF step one – Suppressing the natural menstrual cycle
Women are given a drug (generally in the form of a daily injection) for about two weeks, which suppresses their natural menstrual cycle.
IVF step two – Super ovulation
Fertility drugs containing the fertility hormone FSH (follicle stimulating hormone), are administered to the woman. FSH makes the ovaries produce more eggs than normal. Vaginal ultrasound scans can monitor the process in the ovaries.