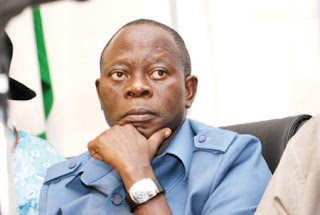 Governor Adams Oshiomhole of Edo State has approved a 5% pay rise for health workers in the state, emphasizing that the wage increment is for all health workers including laboratory technicians, nurses and midwives.
The government had earlier in the month also raised doctors’ pay by 5%. This is coming even as many states in the country find it difficult to pay their wages with many owing salary arrears for up to five months.
Governor Oshiomhole announced the 5% pay rise for the state health workers when he received members of the Joint Health Sector Union (JOHESU) who paid him a courtesy visit in the Government House, Benin City.
He said, “I asked you to come over because I know that two years ago, we had a wage review based on certain criteria which you preferred to call 90% but for me, that was what we were willing to pay and were able to pay at that time. And I did say that when situation improves, we would look at it and make some further upward adjustment.
“At that time, our main source of revenue which is oil was at about $60, $70, $80 and today, it is hovering around $30 per barrel but certainly under $40 and nobody knows what it is going to be. However, I do recognize that for us to maintain our integrity in the eyes of our workers, when promises have been made in good faith, as much as possible, we should try to keep those promises.
“It is no secret that Nigeria’s economy is in crisis. We are burdened not only by low price of crude oil, we are also saddled by massive looting and diversion from public treasury at the federation level. If you have been reading the news as I have done, both print and electronic, it is now established that NNPC did not remit as much as N3.2 trillion to the federation account under Dr. Ngozi Okonjo-Iweala as the Minister of Finance and these bare the issues we have been talking about.”
He said, “Now, Edo State’s share of that money, if it had been remitted to the federation account, would have been more than N50 billion. So those numbers that they throw around in Abuja have direct implication on states and local governments. Imagine what we could have done if we have extra N50 billion today.
“I do appreciate the escalating cost of living even at a time of dwindling revenue accruing to the country. Therefore, just to be able to maintain my integrity and for you to trust my word, when I made those statements in good faith, I thought it would be better but certainly, things are not better and they are even worse for workers because everything is going up.
“So, in recognition of that, rather than as a reflection of ability to pay, but our commitment has not diminished; based on this and other considerations, we will up your pay by 5% across all the health sector workers whether they are lab technicians, nurses, midwives and what have you. I have asked the accountant-general to have that reflected in your salary.”
The governor said, “Let me assure you that I do appreciate your contributions to the development of this state. In your own case, I am very proud of the Central Hospital we have constructed. But I am the first to point out that the building itself though it has and it would have psychological impact on any patient, whether rich or poor, but it would be lot better if we also have state-of-the-art equipment which we have already ordered and they are already being installed but even this alone again would help but it would not do the trick.
“What will do the trick is the human factor. When we have dedicated workers, skilled workers, committed healthcare providers that see the patients as friends, as brothers, as relatives and I know that though money alone does not motivate man, but however, we cannot downplay the fact that a hungry stomach cannot possibly be a motivating incentive.
“So, I want you to accept this as a mark of my own commitment in ensuring that even at this time in our national crisis, that the workers are recognized as a critical agent in the process of governance and our sheer commitment to take Edo State to the highest level”, he said.
Speaking earlier, the chairman, Joint Health Workers Union in Edo State, Comrade Osaretin Agbonlahor said, “We want to on behalf of our members convey our sincere appreciation to the Comrade Governor who has not only demonstrated consistent commitment to our welfare but has this instant called us again and not minding the situation of the economy, he is still ready to raise the bar.
“We want to appreciate you for what you have been doing. The Comrade alert, we have tagged it so because we have never seen it in this manner. When we go for meetings with other states, you hear salaries being owed for up to 2, 3 months but here, by the 23rd of the month, our salary has come.  This is a great motivating factor, and we are grateful to you.
“I am elated to know that at this crucial time, you have not diminished and by the special grace of God, you will not diminish.”