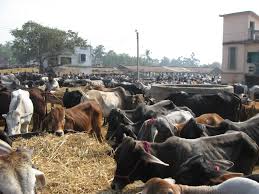 By
Chioma Umeha
Emmanuel Udom
Lagos
Epidemic looms at Abattoir cattle market in Oko-Oba, Agege Lagos, following the demolition of shanties and structures by officials of the Lagos State Ministry of Agriculture assisted by fully armed taskforce officials.
Alhaji Bello Danmubaffa, Sariki Fulani, Abattoir Cattle Dealers Association of Nigeria at the market told newsmen that last Sunday officials of the ministry, led by Toyin Suarau, Commissioner for Agriculture with backup from the police and Taskforce officials in the state stormed the market at about 7.am.
According to Danmubaffa, 24 toilets/bathrooms, which were approved by the same ministry before constructions were demolished alongside two mosques.
His words: “Each of the toilet-bathroom was built by private owners at the cost of N20million after approval from the same ministry who came to demolish them in the name of demolition of shanties to make way for the construction of a modern abattoir of international standard.”
But, Sariki lamented that since Sunday, the entire abattoir have been thrown into confusion as there are no water, power, nor toilets/bathrooms to service the estimated 10,000 people comprising butchers, breeders, cattle dealers, and customers, who come from other states in Nigeria and countries in Africa for business transactions.
His words: “People now have no option than to defecate anywhere they like within and around the abattoir, while our cattle are dying daily since the demolition exercise was carried out.”