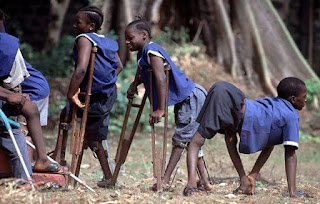 The Ogun State Primary Health Care Board (OGSPHCB) says it would continue with its new strategy aimed at capturing more eligible children under the ages of 0-5 years, in its bid at ensuring total eradication of Polio in the state and in compliance with world standard on campaign against polio,.
The State Commissioner for Health, Dr. Babatunde Ipaye made this known when he led the State Monitoring Team of year 2017, National Immunization Plus Days (NIPDs), to Ijebu-Ode, during the 2nd round of the programme
Dr. Ipaye, maintained that the present administration in collaboration with the World Health Organization (WHO) was committed to making the state Polio free as the state had not recorded any case of polio since 2009.
“Ogun remains polio free state since 2009 and we don’t want to rest on our oars as we will continue to maintain our status as polio free state, we thank the government for their efforts and the good people of the state for standing resolutely for our vendors for the immunization”, Ipaye said.
He commended the religious leaders, schools, houses visited as well as the parents and guardians for being receptive of government effort at ensuring the complete well being of children across the state, adding that government could have not recorded huge success without the support of residents.
In the same vein, the Permanent Secretary in the Ministry, Dr. Nofiu Aigoro urged the health workers to strive harder in order to cover the areas allocated to them, including the remote areas which people might not believe that they might do.