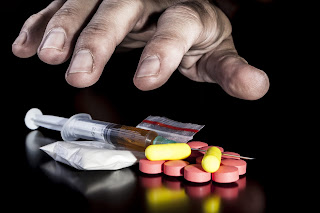 Dr Abubakar Bukola Saraki, Senate President, has expressed readiness of the Red Chamber to look into the amendment of NDLEA Act to curb the prevalence of drug abuse and illicit drug trafficking in the country.
Saraki spoke when Pharm Ahmed Yakasai, President of Pharmaceutical Society of Nigeria (PSN) and some delegates of his society paid him a courtesy call to discuss the recurring menace of drug abuse and misuse in the country.
Saraki promised that a Motion would be raised the following day on the floor of the Senate to adopt measures in ensuring that the trend is halted in the interest of the people and the society.
At the plenary of the Senate, the Motion was listed as promised on the Order Paper and debated on the floor of the Upper Chamber during which the following resolutions were reached.
First is to mandate its Joint Committee on Drugs, Narcotics and health to investigate the growing menace of cough and other prescriptive drugs abuse.
Second is to urge the Federal Government to partner with stakeholders, traditional rulers, Pharmacists councils, NGOs to create framework in fighting the aforementioned category of drug abuse.
The third one is to urge National Agency for Food and Drug Administration and Control (NAFDAC)  to embark on a vigorous sensitization campaign on the dangers of drug abuse and steps on achieving a successful rehabilitation for people with the addiction.
While praying for the Senate to amend the NDLEA Act to accommodate a new directorate of consumer protection, Yakasai, had earlier during the visit requested for it to be headed by a registered pharmacist.
According to Yakasai, the step will stem the unprecedented toll which drug misuse and abuse are having on health consumers in the country.
The PSN boss further said that the proposed directorate should be empowered to coordinate health advocacy, monitoring and control of narcotics as well as other medicines with abuse and misuse potentials in the country.
Yakasai added that the amendment of the NDLEA Act would be best pursued on the template of a private member’s bill which he assured would have the maximum support of the PSN.
He stressed; “We must not fail to utilise this discourse to request for the cooperation of Your Excellency to facilitate the Pharmacy Council of Nigeria (PCN) Act amendment bill which is championed by the Nigeria Law Reform Commission which is currently pending before the House of Representatives Committee on Health.”
According to him, the envisaged PCN bill was well grounded in law to boost the inspectorate activities of PCN which have statutory powers to regulate and control all pharmaceutical premises in both public and private sectors.
The mandate, he added, also gives PCN latitude to modulate the activities of Patent Medicine Dealers in the country.
“We further recommend rehabilitation of persons that are addicted to drug by the Federal Government,” the PSN President said.
The group further admonished the National Assembly(NA) to continue to be wary of attempts by some stakeholders in the pharmaceutical sector who continue to sponsor bills geared towards attaining autonomy as practitioners when the level of their training confers only a sub-professional cadre at best.
“If such moves are allowed to succeed, the National Assembly might only make consumers of health more susceptible and vulnerable to the services of half-baked practitioners,” Yakasai warned.
He urged the National Assembly to ensure that the Executive arm of the three principal health agencies constitutes the governing council and boards of the plethora of professional bodies, Federal Health Institutions (FHI) as well as key parastatals of the sector.
He said; “We strongly urge the National Assembly to ensure that the Executive arm to constitute the governing council and boards of the plethora of agencies, Federal Health Institutions as well as key parastatals of the health sector.
“This is particularly germane to an effective execution of the statutory mandate of the three principal agencies of the Federal Government involved in drug distribution endeavours in Nigeria,” Yakasai stressed.
“For the records, the three principal agencies of the Federal Government are Pharmacists Council of Nigeria (PCN), National Agency for Food and Drug Administration and Control (NAFDAC) and NDLEA.
“The PSN wishes Your Excellency an uncommon success story as you continue to initiate beneficial Acts of Parliament for the good of the Nigerian people,” Yakasai added.