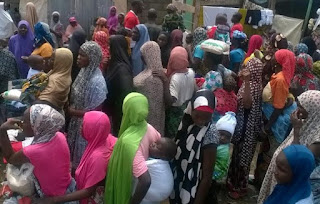 By Chioma Umeha
Promasidor Nigeria Limited has donated various products to Empower 54 Project in support of its programme aimed at eradicating malnutrition among Internally Displaced Persons (IDPs) in Nigeria.
The donation, which took place last week, would in no small measure help to boost the worthy initiative of the organisation, which is at the forefront of eradicating malnutrition in the country.
Promasidor’s support to Empower 54 is in line with its corporate social responsibility policy, which has seen it contribute to worthy causes across the country.
Expressing delight at the gesture, Princess Modupe Ozolua, Founder and President of Empower 54, said the products were greatly appreciated and the donation worth emulating as malnutrition is a major concern among IDPs, refugees and underprivileged people not only in Nigeria but also across the African continent.
According to Prof. Isaac Adewole, the Minister of Health, 33 per cent of Nigerian children under five years suffer from chronic malnutrition, which translates into very disturbing statistics and many innocent lives lost due to lack of sensitisation.
Princess Ozolua commended Promasidor Nigeria Limited for supporting Empower 54 in such an immeasurable manner, assuring that the products, which contain vital nutrients would be judiciously utilised.
Empower 54 is a United States non-profit organisation providing humanitarian assistance since 2003 through health, education, empowerment, and IDP/refugee programmes to the underprivileged Africans.
The organisation evacuated the severely malnourished IDP children from Bama to Maiduguri for treatment two years ago, but realised more has to be done to save children suffering from severe acute malnutrition.
Princess Ozolua said it was that experience that prompted Empower 54 to lead the move towards creating strategic measures to eradicate the deadly epidemic.
The Ooni of Ife, Oba Adeyeye Enitan Ogunwusi, is Empower 54’s global goodwill ambassador for its campaign to eradicate malnutrition in Africa, and it’s also supported by the Australian government, IMF and other international partners.