Trump’s Global Gag Rule Is A Tragedy To Maternal Health 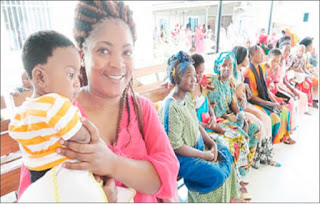 By Chioma Umeha
“I was raped in school. As a result of this, I became pregnant. I was 13 at that time. Then, I was in Junior Secondary School (JSS) two. So I did not know that I was pregnant. When my parents found out that I was pregnant, they told me to go for abortion.
“They took me to a particular nurse somewhere in Okobaba, which is close to where we live at Otumara Community at Apapa Road, Ebute Metta, in Lagos. The nurse gave me an injection in her house one Saturday morning. I don’t know what type of injection I was given, but the nurse assured us that the pregnancy would be terminated the next two days – Monday.
“That fateful Monday, I was in the bathroom when I passed the foetus. It was like a heavy period, all at once. I lost a lot of blood such that I felt dizzy while walking, yet no medication was given to support me.
This was the confession of Esther, (not real name) a 17-years-old girl to Daily Independent. She was spotted recently, at Otumara Community, Apapa area of Lagos where she was spotted begging with a baby at her back.
“I was seriously ill after the abortion; that I am alive today is by chance. That is why I have sworn not to go through abortion again in my life. As you can see, I have a new baby,” she further told our correspondent.
Many women and girls in Otumara Community are ready to share their stories of abortion as long as their identities are not revealed. This is because of the stigma and misinformation that still surrounds the procedure. Even in countries where abortion has been legal for decades, abortion often remains a controversial subject with those against the procedure giving political, moral, social, ethical and religious reasons.
These developments are coming amid anxieties over the impact of reintroduction of the Mexico City Policy, also known as the ‘Global Gag Rule,’ (GGR) by President Donald Trump.
GGR is an executive order by the US government that blocks U.S. federal funding for non-governmental organisations that provide abortion counselling or referrals, advocate to decriminalise abortion or expand abortion services.
There are deep concerns among experts that GGR would worsen the maternal morbidity and mortality indices in all the developing countries of the world.
In Nigeria, abortion is legal only when performed to save a woman’s life. Still, abortions are common, and most are unsafe because they are done clandestinely, by unskilled providers or both.
The Guttmacher Institute 2015 fact sheet shows that unsafe abortion is a major contributor to Nigeria’s high levels of maternal death, ill health and disability.