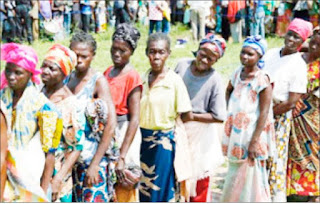 To meet its 2018 humanitarian intervention programmes in the North-east where Boko Haram insurgency has affected more than 10 million people, the United Nations weekend, said it requires $1.05 billion assistance.
The world body said the 2018 Humanitarian Response Plan appeal was pecked at “$1.05billion, people targeted in Borno, Adamawa and Yobe States, 6.1 million: number of partners participating in the HRP: 60, number of projects included in HRP 173.”
The UN also disclosed that it recorded a shortfall of $196 million in donations from the targeted $1 billion for humanitarian intervention in the North-east of Nigeria in 2017.
Following severe humanitarian conditions and insecurity occasioned by the insurgency, the UN in collaboration with other international organisations and government have been actively leading in humanitarian assistance in the North-east in the last nine years,
Edward Kallon, UN Humanitarian Coordinator in Nigeria, who made the disclosure weekend at the launch of the 2018 Humanitarian Response Plan for the North-east in Abuja, however announced a target of $1.05 billion for 2018.
Kallon explained that the fund which is expected to come from about 60 donor organisations, would be expended on 173 projects and would impact on the wellbeing of 6.1 million people in the three most ravage states in the region; Borno, Adamawa and Yobe States.
He commended the partners for their contributions and expressed optimism that through their support, the 2018 Humanitarian Response Plan would be successful.
“In 2017, donors –  who are represented here today -funded the plan generously.
“The $1 billion appeal was 70 per cent funded by the end of the year – representing more than $740 million, a staggering amount that actually meant that Nigeria was one of the most funded appeals globally.
“The donor commitment was extraordinarily impressive, and one of the most remarkable I have seen in career. The total donated to the humanitarian response last year, including HRP and non-HRP interventions, reached $945 million.
“We have also committed this year to including any carry over from last year, so as to be entirely transparent when it comes to funding. The carry-over from the 2017 HRP to the 2018 HRP will be an estimated $196 million. This means that this sum has already effectively been raised and allocated to the 2018 HRP,” he said.
The envoy also stated that the 2018 intervention is aimed at building on the humanitarian work carried out in previous years, adding that it is anchored on three strategic objectives.
They include; Provision of life saving emergency assistance to the most vulnerable people in conflict affected areas ensuring that assistance is timely and to scale; Ensuring that all assistance promotes the protection, safety and dignity of affected people, and is provided equitably to women, girls, men and boys.
The third one is to assist people kick start their lives again and also reconstruct the foundations of their lives so that they are better prepared to face crises.
He further said the 2017 HRP provided live saving assistance to 5.6 million people in the North East, thereby, reducing the number of food insecure people from 5.1million to 3.9 million.
“A cholera outbreak was contained through the innovative use of an oral vaccine. 1.3 million farmers were assisted to help improve agricultural production. And thousands of children were supported to go to school, against all odds,” he said.
Kallon, however, called for a political solution to the challenges in the North-east, to prevent the crisis from degenerating in 2018.
Responding on behalf of the federal government, Minister of State for Budget and National Planning, Hajiya Zainab Ahmed, thanked the international community for rallying support for Nigeria at her time of need.
She also acknowledged efforts by the multinational task force and the military for liberating communities hitherto in the enclave of Boko Haram, adding that the country has now moved from acute crisis to a situation where people are now returning to their homes.