US-Based Foundation Arrives Nigeria For Third Round Of Kidney Transplant 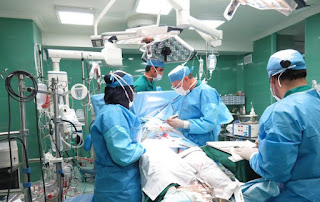 A team of US-based kidney transplant surgeons and nurses have arrived Nigeria to carry out kidney transplants, which would be the third in the series of the medical exercise which commenced in 2017.
Under the aegis of a charitable organisation known as United Kidneycare Foundation (UKcF), based in the United States of America (USA), the team has been at the forefront in tackling the menace of kidney disease in Nigeria. Its members include: Dr. Obi Ekwenna, Engr. James Ogbuka Umekwe and Dr. Iyore James.
The team arrived in Lagos a few days ago to carry out more kidney transplants in the country.
Early December 2017, the team carried out the first successfully kidney transplant at the Federal Medical Centre (FMC), Umuahia, Abia State.
The team was led by transplant surgeon, Dr. Obi Ekwenna, an assistant Professor of Transplantation and Urology  in partnership with the Federal Medical Centre(FMC)  under the leadership of the Medical Director Dr. Abali Chuku, to carry out the exercise.
This feat was a historical one as it was brought hope to a population of more than 25 million people in the South East.
The team also said that it performed two kidney transplants on January 24, this year at the FMC, Umuahia.
Commenting on why the organisation decided to embark on treating kidney disease in the country, the team said: “We want to be a source of relief for the large population of Nigerians living with chronic kidney disease.”
Speaking further, they said it was due to significant rise in death due to kidney disease and lack of kidney transplant centre in many parts of the country.
“We want people to have kidney transplant at an affordable cost. Moreover, we want to reduce medical tourism to overseas for kidney transplants,” the team added.