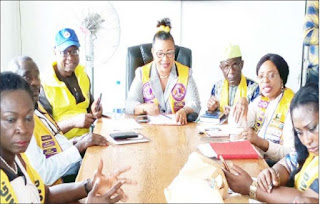 Lions Club International in Nigeria has canvassed for total eradication of one of the most contagious viral diseases in the world, Measles, which can easily be prevented through routine immunisation services especially in schools.
At a press conference on Measles Eradication campaign programme held at the Lions Secretariat, Yaba, the District 404B2, Lion Asiwaju Ayobola said the campaign is aimed at reducing mortality among children because available records show that Measles claims about 246 lives daily most of which are children.
“The significant of this press conference is to underscore our concern for the eradication of the deadly disease and to drive home our belief and involvement in the mass mobilisation for immunisation as a potent weapon to fight and stamp out Measles from our land” she said.
She said for those who survive the attack, nearly 30 per cent suffer complications such as pneumonia, hearing loss, brain damage, blindness and encephalitis.
She said the sensitisation is being sponsored by Lions Club International, to compliment the efforts of government such as  distributing education materials, T-Shirts, biscuits to children to come out for the immunisation adding that the Lions Clubs International Foundation has entered into partnership with various organisations around the world to vaccinate children who need it most.
The District Governor explained that the Club has been working closely with the Federal Government through the National Primary Health Care Development Agency (NAPHCDA) and similar agencies to vaccinate millions of Nigerian children against Measles thus preventing needless death or life long disability.
“It is however important to state that the role of Lions Club in Nigeria in this programme has been in the area of social mobilisation and advocacy which we have been doing effectively since 2011 and shall be sustained for the benefit of Nigerian children”, she said.
Ayobola reaffirms that the Club shall continue to advance, promote and champion the course of mass mobilisation for immunisation in all parts of the country to ensure that no child within the age range of nine months to five years is left out of the Measles vaccination activity thus this year’s social mobilisation by Lions Club International District 404 will be happening in nine states namely, Kwara, Edo, Ebonyi, Ekiti, Osun, Ogun, Ondo and Akwa Ibom.