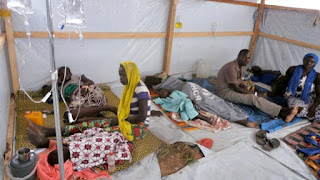 A cholera outbreak in Cameroon has claimed at least a dozen lives. Hundreds of people have been rushed to several hospitals in the central African state.
It is feared some of the cases were imported from Nigeria and may contaminate refugees fleeing the Boko Haram insurgency, according to Voanews.com reports.
Arabo Saidou, the highest government official in charge of health in Cameroon’s north region says the first cases of cholera were reported along Cameroon’s border with Nigeria two months ago.
He says the disease has continued to spread since four cases of cholera were recorded in the northern Cameroon town of Mayo Oulo that borders Nigeria on May 18. He says many people, especially children, have been dying both in and out of hospitals.
In May, the Word Health Organization reported that Nigeria’s Adamawa, Borno and Yobe states had been experiencing recurrent cholera outbreaks since February, with a total of 1,664 suspected cases and 31 deaths.
Many people from the three Nigerian states travel to Cameroon for business. At least a hundred thousand are in Cameroon as refugees fleeing the Boko Haram insurgency, with over 90,000 at the Minawao refugee camp.
Issac Bayoro, a Cameroonian epidemiologist working in the Mokolo administrative area where the Minawao refugee camp is located says they are educating refugees to respect hygiene norms and are also screening Nigerians coming to the camp in a bid to protect not only the refugees but their host communities.
He says many people continue to defecate in the open air or in streams and river beds where both humans and animals go to find water to drink thereby facilitating the spread of cholera.
He says hygiene is not respected as many people do not wash their hands with soap as advised. He says people should stop trusting the belief that an African is naturally vaccinated and cannot die of dirt.
Cameroon’s ministry of health indicated that the disease quickly spread to Yaounde and Douala, major cities in the central African state. The case reported in Yaounde was of a teenager who travelled to Yaounde from northern Cameroon with his mother. He latter died in a hospital according to the government.
Thomas Tawe, a university student and resident of Yaounde says he fears cholera may spread rapidly in the city because just 30 percent of the population has access to good drinking water.
“In the city of Yaounde only those who can pay can have water. When you go into the quarters (neighbourhoods) you see that people are carrying water from unhygienic sources,” said Tawe. “If the water is contaminated, automatically we will be contaminated.”