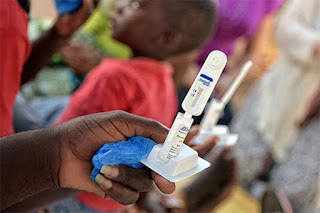 Having the second largest number of new infection of the Human Immunodeficiency Virus/Acquired Immune Deficiency Syndrome (HIV/AIDS) worldwide, young people are at the hub of an expanding HIV crisis, according to research.
Against this background, Nigerian youths from different tertiary institutions are prepared to begin implementation of HIV self-testing solutions they developed in communities, being part of measures to achieve zero prevalence of HIV/AIDS among young people in the country.
Research shows that the number of young people in Africa is estimated to double by 2050, yet fewer than one in five Nigerian youth have never been tested for HIV.
Perhaps, more worsening is that many adolescents engage in risky sexual behaviours with multiple partners, which puts them at higher risk of sexually transmitted diseases (STD), including HIV.
The youths who were engaged in an HIV Self-Testing Designathon contest tagged; ‘4 Youth By Youth’ developed different effective and innovative prevention tools and approaches that would be employed in communities to help reduce the spread of HIV among their group in the country.
Speaking at the event, Dr. Ezechi Oliver, the Director of Research (NIMR), who is also one of the Principal Investigators, ITEST project, said that the focus of Innovative Tools to Expand Self-Testing (ITEST) project is on the youths.
Ezechi said the goal is to ensure that Nigerian youths know their HIV status and remain healthy, noting that recent report showed a reduction of HIV prevalence in the country, with young people being the group with the higher population of HIV new infection.
He explained that the youths were engaged in an innovative contest to develop workable solutions that would enable young persons in communities self-test for the virus as well as access immediate treatment if tested positive.
Ezechi said the selected three teams will go into communities to implement and practise the HIV self-testing tools they developed, after which the research institute will scale up the idea and implement it across the country to be able to achieve total elimination of the viral disease and new infections.
Explaining the project, Dr. Juliet Iwelunmor, one of the Principal Investigator, said the youths were engaged in a four-week training innovative boot camp that had over 900 young people from across Nigeria.
Iwelunmor said that they entered for the contest with 13 teams and 45 innovators participate in the HIV Self-Testing Designathon competition to mark the world AIDS day.
Iwelunmor said the project is in line with Nigerian’s strategic objectives of achieving increased access to HIV testing services and other sexually transmitted diseases among young people.
Iwelunmor who is an Associate Professor in Global Health at Saint Louis University, Missouri, further explained; “4YBY used open challenge contests and capacity building workshops focused on activating innovation, entrepreneurial mindsets and skills to harness the innovative spirit of young people in addressing health challenges that affects them.
“Our ultimate goal especially among the young people is for them to be the leaders and partners of promoting HIV self-testing in Nigeria,” he added.
Also speaking on the importance of the project to the reduction of HIV prevalence in Lagos state, Dr Oladipupo Fisher, the Representative of the Lagos State AIDS Control Agency, (LASACA), said the project is essential as the world looking towards the eradication of HIV by the year 2030.
Fisher added that there is need to engage the youths who occupy the larger part of the country’s population and the group with the higher risk and number of new infections in developing solutions that will totally eliminate the virus to reach the global target.
He said Nigeria must ensure it achieves the first 90 per cent target of the UNAIDS, that allows people to test for their status and know where they stand, which if tested positive, they will commence treatment, which will then suppress the viral load of the disease and prevents transmission to other people.
He also explained that the agency partnered in this initiative which will enable it to effectively scale up its plan to reach the youths and ensure they access treatment, which he noted will suppress viral load of the disease.