Save The Children Launches Inspiring Project To Curb Pneumonia 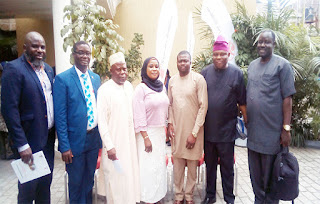 Some of the dignitaries at the Save The Children event

With pneumonia being the second biggest killer of under-5 children worldwide, Save The Children International unveiled the report of its Integrated and Sustained Childhood Pneumonia and Infectious Disease Reduction in Nigeria (INSPIRING) project targeted to curb the menace.

The launch of INSPIRING project, a situational analysis of the disease in Lagos and Jigawa states was to formally flag-off the scheme in the two states.

Pneumonia reportedly killed 880,000 U-5 children globally in 2016 alone. Half of these were recorded in only five countries, one of which is Nigeria which also recorded about 19/1000 deaths of U-5 children in 2016.

Launching the report in Lagos, the State Child Survival Strategic Coordinator, Dr. Saida Ogaga, representing the Commissioner of Health, Prof. Akinola Abayomi, applauded Save the Children for its timely intervention through the pneumonia project.

Abayomi also said that the project is coming at a time the Lagos state government needs to showcase its efforts and child survival activities in the state.

She expressed the state government’s commitment to support the project and any other programme aimed at promoting health and well-being of the people in the state.

Dr. Ogaga was optimistic that the INSPIRING intervention would be on an integrated approach, encompassing detection, treatment and prevention.

Stating reasons Save the Children decided to focus on pneumonia, the organisation’s Chief of Party, Save the Children Project, Dr. Adamu Isah said the disease remains the biggest killer of children under 5 both globally and in Nigeria.

“If you look at the Global Health Observatory in 2016 they are saying out of 5.6 million U-5 deaths in the world, about a million was caused by pneumonia.

What is more important is that five countries contributed more than half of that million. Our dear Nigeria is one of those countries and 18 per cent of mortality which translates to 127,000 deaths, or even more, is connected to pneumonia. So certainly it is a serious problem which is under-diagnosed, under-recognized, under- treated and under-reported.

“A UNICEF report in 2015 shows that actually 61 per cent of all-cause mortality in children U-5 happened from day zero to the first year of life so, most of the death we are seeing in under-5 is actually within their first year of life.

Pneumonia cause specific is even greater. 67 per cent of the deaths caused by pneumonia happened when the children were less than a year old. It happened in the grassroots, the slums and many other places,” he said.

Dr. Isah also quoted the Global Health Observatory report which showed that cases of many diseases declined during the 15-year period between 2000 and 2015 worldwide, with measles declining by 85 per cent, HIV/AIDS by 61 per cent and malaria by 60 per cent.

He said the report also showed that only pneumonia did not reduce appreciatively, recording only 47 per cent decline in 15 years.

On the rational for choosing Jigawa and Lagos states for the project, he described the two states as very far apart and with different cultural background, but with a high number of pneumonia cases and deaths among children.

“One is rural, agrarian, conservative, (situated) around the Sahel region – almost close to the Sahara, with high number of very young people, high fertility rate and many other things.

The other is almost by the coast; it is the commercial centre of the country with a lot of rich and poor people and slums.  It is the home of Nollywood, music and a lot of other things.”

He disclosed that the project would adopt the Global Action for the control of pneumonia, as recommended by WHO and UNICEF, which involves promotion, prevention, treatment diagnosis, among others, in its implementation in the two states.

“We are going to try as much as we can, to support the states in doing that. In Jigawa which we consider a rural community, we are going to have a lot of community engagements.

We want to change their perception and health seeking behavior and establish a linkage between the primary health care centres, where we want to work, with the secondary health care facilities to ensure there’s a two-way referral facility.

“In the case of Lagos which is more of an urban state, we want to focus more on the use of technology. We want to bring in pulse oximeters and oxygen system.

Where they have, we want to improve on it and provide, where they there is none.”

Dr. Isah urged all stakeholders to join Save the Children and do the needful to “to control this terrible problem of pneumonia.”

Presenting the final report of the INSPIRING Situational Analysis, Prof. Adegoke Falade a renowned professor of peadiatrics at the College of Medicine, University of Ibadan disclosed that the analysis was designed to generate gender-sensitive evidence on the current state of pneumonia in children aged 0-59 months in Jigawa and Lagos states.

Key findings of the analysis, according to him include, among others; Care-seeking for children with pneumonia was poor in both states, with only 38.7 per cent and 31.4 per cent of caregivers from Jigawa and Lagos recognizing at least one symptom of pneumonia.

Vaccine coverage with PVC-10 (vaccine) was high in Lagos but low in Jigawa.

Oxygen and pulse oximeters were not universally available across secondary care and were less available along with other IMCI equipment in Jigawa.

Knowledge of pneumonia was generally poor among community members and was associated with several misconceptions around the origin of the illness – and therefore their subsequent decision to seek care.

Obviously, there is need for specific policies and guidelines on pneumonia as well as advocates to push for strong political actions to tackle the disease, according to stakeholders.