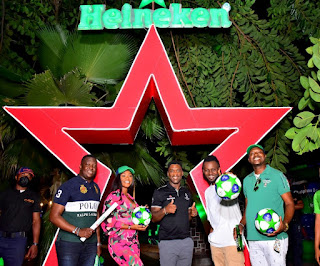 Heineken has hosted its most extravagant Trophy Tour in Africa, in an effort to keep the UEFA Champions League (UCL) experience closer to more football fans around the world. The 10-day tour, which concluded on April 13 in Abuja, Nigeria, ahead of the 2022 final match on May 28, included various public engagements in the Democratic Republic of Congo, Mozambique, Ethiopia, and Nigeria, where the UCL trophy was on display. Fans from Rwanda and Congo Brazzaville also attended the tour in Nigeria and DRC respectively.

Open-truck city parades, novelty matches with local celebrities, UCL quarterfinal match viewings, fan meet and greets, picture sessions, media rounds, Afrobeats concerts, and visits to government agencies responsible for football were among the events surrounding the tour. Heineken has been a sponsor of the UCL since 2005, and the company's leadership says that its Africa-wide trophy tour for the 2021/2022 season would reach 50,000 Africans directly, with an estimated 10 million more being reached through media coverage.

A football match sponsored by Heineken in Lagos, Nigeria was a highlight of the trophy trip. It matched Nigerian music superstars and football luminaries against the Trophy Tour Ambassador, professional coach and former Dutch international midfielder Clarence Seedorf, as well as top staff of Nigerian Breweries, the local Heineken brewer.

The novelty battle took place before an Afrobeats performance featuring African superstar Davido and Peruzzi, another top-tier Nigerian artist. At the M.K.O Abiola stadium in Abuja, Nigeria's capital, members of the Heineken management team and Seedorf met with Sunday Dare, the Nigerian Minister of Youth and Sports Development.

The Champions League is an annual competition between top-tier football clubs organized by UEFA, the umbrella organization for 55 national football associations across Europe. The last match in 2022 will take place on May 28 at the Stade de France in Paris.

"The Trophy Tour's purpose is to encourage a new generation of African footballers and thank supporters for their support of the UCL and Heineken," stated Bram Westerbrink, Heineken's Senior Global Director.

Bram also mentioned how important the continent is to the growth of football and the UCL. Several European clubs in the English, French, Italian, Spanish, and German leagues have sizable African fan bases, with many of the supporters organizing get-togethers and celebrations when their favorite teams win tournaments.

Football has positioned itself as the most popular sport on the continent, with over 100 Africans currently playing professionally, over 25 UCL winners from Africa, and over 300 million African followers. "This is why Heineken is happy to celebrate its partnership with the UCL," Hans Erik Tuijt, Director, Global Heineken Sponsorships, said, adding that Heineken has the highest level of awareness as a UCL sponsor on the continent.