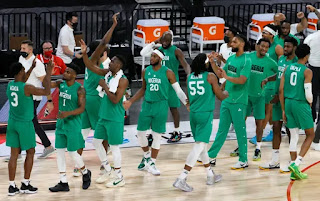 Following the federal government's approval of the sport's two-year suspension from international play, Nigerian basketball has been cast into shadow.The government's move is based on a staged crisis engineered by some presidential figures who feel frightenend over Musa Ahmed Kida's re-election as president of the Nigeria Basketball Federation (NBBF).

The government announced the decision as a result of the "unending problem that has afflicted and virtually decimated basketball development in the country," according to the administration. "President Muhammadu Buhari has approved the immediate withdrawal of Nigeria from all international basketball competitions for a period of two years," according to the statement.

The statement, signed by Alhaji Ismaila Abubakar, Permanent Secretary, Ministry of Youth and Sports Development, noted that the withdrawal will allow the country to revitalize the sport from the grassroots level as well as revive the country's dormant domestic leagues.

The government reaffirmed its interest in and dedication to the sport's development, as well as the plethora of homegrown talent, stressing that it wants all of this to take place in an atmosphere free of resentments and squabbles.

As it embarks on far-reaching steps to reposition, sustain, and stabilize the sport for long-term growth and success, the government has urged players, officials, fans, and other stakeholders to be calm.