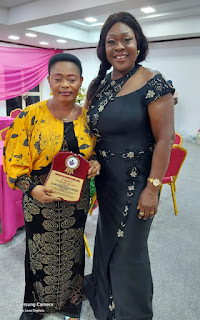 Liberator Meg Odinachi, Imo Chairperson, StandUp For Women Society (SWS) with  Comrade Nma Ozioma Onwuka-Okereke, Vice - President, SWS South-East Zone and a Daughter of Abia State after the latter was given an award by SWS at the just-ended two-day National Conference held at Lekki, Lagos.

The StandUp For Women Community (SWS) has prompted Nigerian women to remain together in love and work together to establish a peaceful atmosphere that will benefit our society.

Barrister Deborah Ijadele-Adetona, founder and President of SWS, made the call during a two-day National Conference held at Pelican International Hotel, Lekki Lagos, where women from all States Chapters, including the Federal Capital Territory, gathered to take stock of their activities in the previous year, achievements, and future plans in order to reposition themselves and make concrete decisions to improve the lot of vulnerable women and children in the society.

In her contribution , Hauwa Yesufu, Human Rights Activist, said that countries of the world where women are recognised are doing well. She implored Nigerian women not to relent in their effort to ensure financial independence and have properties they would bequeath to their daughters .

She said that if women do play their roles in the society, there would be peaceful environment and conflict resolution saying that education must be compulsory for our girl- child while encouraging women to engage with decision makers to ensure that their voices are heard in the society .

The highlight of the occasion was Award night where the Vice - President, SWS South-East Zone, Comrade Nma Ozioma Onwuka-Okereke , a Daughter of Abia State was honoured with the Excellent Feedback Award.

The President, SWS, Barr Deborah Ijadele- Adetona appreciated Comrade Nma Okereke for doggedness in making sure that things are done right for the good of StandUp For Women Society (SWS), hence the Excellent Feedback Award.

In her response, Comrade Onwuka-Okereke expressed her Joy for the Award and dedicated it to God Almighty who gave her the knowledge to give positive feedback that instigated the award. She also thanked all the states in South - East Zone especially, Liberator Meg Odinakachi  Chairperson, Imo State Chapter, for her efforts which was her (Comrade Nma Ozioma Onwuka-Okereke's)  strength and achievements so far.