The Lone Candidate for the Governorship of Abia State and For The Youth Party (YP), Ada - Ugo Abia, was Elected on Tuesday 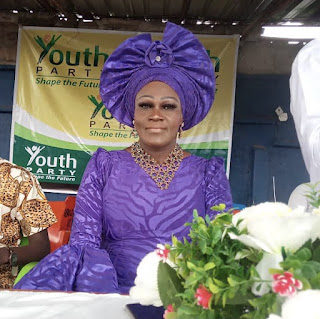 Mrs. Oluchi V. Bradford Ogwo, the lone candidate for the Governorship of Abia State and for the Youth Party (YP), Ada - Ugo Abia, was elected Tuesday by the teeming Abia youths and women to fly the party's flag and compete for the position of Governor of Abia State in the 2023 General Election.

She received the flag, a symbol of the Youth Party in Abia State, after winning the Primary election with 287 votes. In her acceptance speech, Ada - Ugo Abia congratulated the delegates who voted for her to be elected as the Youth Party's Governorship Candidate in the 2023 general election.

She reminded Abia State residents that now is the moment to bring good change to the state's politics by electing a competent woman who understands what it takes to manage the state as Abia Governor in 2023.

Ada - Ugo Abia pledged to send our youths abroad to study new skills and then return home to start businesses and become employers of labor, lowering the rising rate of crime among youths in Abia State and Nigeria in general.

She promised to build an airport in Abia State and to reform the state's political game for the betterment of the citizens of Abia.