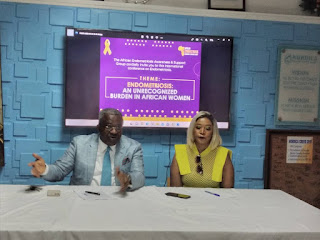 The African Endometriosis Awareness and Support Group has organized the second international conference on endometriosis in Lagos, Nigeria, on the 25th of June to reveal new breakthroughs in the diagnosis and treatment of the ailment.

Dr. Abayomi Ajayi, Medical Director and CEO of the Nordica brand, informed journalists that the theme of this year's conference is "Endometriosis - an Unrecognized Burden among African Women."

Ajayi who spoke at the briefing in his Nordica Fertility Centre, Lagos, said, "This theme is extremely relevant at this time considering the dwindling resources available to African countries, especially in critical areas such as health care and education."

The Nordica boss, who is also the Trustee, Endometriosis Support Group Nigeria (ESGN) who explained that this would be the first physical event post-Covid-19 bemoaned challenges of management of Endometriosis, including inaccurate diagnoses.

Ajayi  elaborated, "One of the major concerns about the condition is its oftentimes inaccurate diagnoses, which is usually the result of a dearth in trained medical manpower, as well as obsolete equipment in many medical facilities across the African continent.

"For the women living with this condition, life seems really unfair. The pain, the tough choices they have to make in determining if they will have children, their sexual life, relationship challenges and general well being should be of grave concern to all of us."

He said, "Significant advances have been made globally in the diagnosis and management of the condition, which we seek to bring to the fore to an African audience at the conference. The conference is open to medical practitioners, women living with endometriosis, endo activists and the general public.

"We have put together a formidable line up of speakers and panelists to do justice to the subject matter at the conference.

"We will be having a leading light in the world of biological engineering and a global advocate for endometriosis, Linda Griffith, deliver a keynote address at the conference. She is a professor of bio and mechanical engineering at the Massachusetts Institute of Technology. We will also be having Professor Francisco Carmona from the University of Barcelona, Spain. He will be speaking about fertility preservation in endometriosis.

"We also have the secretary general of the European Endometriosis League, who is also a professor of obstetrics, gynaecology, oncology and seriology at Bethesda Hospital, Duisburg, Germany, Professor Harold Kentel.

"He will share on how to build a robust African Endometriosis Awareness Initiative, taking lessons from the European league," the ESGN boss said.

Similarly, Dr. Taner Usta, a professor of obstetrics and gynaecology, and the president of the Turkish Endometriosis and Adenomyosis Society, is expected to speak  about thoracic endometriosis at the conference.

Also expected at the event, is an expert in managing endometriosis in adolescents, Dr. Robert Zurawin, a renowned obstetrician and gynaecologist in Houston Texas, Ajayi disclosed.

The Nordica boss said, "Furthermore, another one of our guest speakers is a specialist in endocrinology and infertility. Dr. Keith Isaacson of the Harvard Medical School. He will be speaking to us about differentiating between endometriosis and adenomyosis.

"One of our guest speakers is also a very good friend of the house. He has been to Nigeria on two separate occasions: Dr. John Dulemba, a former military helicopter pilot with specialization in endometriosis and pelvic pain. He will be speaking to us about robotics in endometriosis."

Similarly, Ajayi noted that  he would be speaking on an interesting topic: High Intensity Focused Ultrasound (HIFU) in the management of adenomyosis.

"You will agree with me that we have gone to great lengths to bring together these erudite speakers to help in giving hope to women living with the condition.

"We also believe that we will be able to attract the attention of African governments to initiate policies and programmes that will greatly impact the lives of women with the condition, especially in accessing care. We are also calling on the media to join forces with us to raise awareness about the condition and give a voice to the voiceless," Ajayi added.

Still worried over endometriosis management in Africa, Gagosi further said, that her country, Botswana does not provide Invitro fertilisation (IVF).

She urged for more involvement of  governments in the continent by formulating policies that will greatly improve the lives of women with endometriosis through better management.