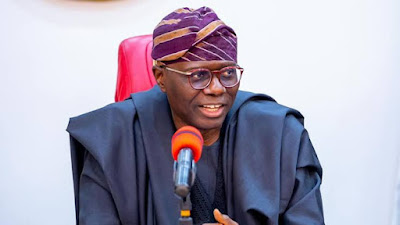 Sanwo-Olu made this statement at the Lagos House, Ikeja at the First Family of Lagos State's 2022 Eid-ul-Adha celebration, which was sponsored by the Lagos State Ministry of Home Affairs.

Dr. Obafemi Hamzat, the deputy governor, spoke on his behalf when he urged Nigerians to make the best decision possible in 2023 because it will affect the destiny of their nation.

He stated that because the outcome of the general elections in 2023 will have a significant impact on Nigeria's fate, Nigerians could not afford to choose the wrong leaders in that year's elections.

Sen. Bola Ahmed Tinubu, the presidential nominee for the All Progressives Congress (APC), is the best candidate for 2023, he emphasized, because he has created links throughout Nigeria.

He said that Tinubu had worked with individuals from many racial and ethnic groupings in the nation, stressing that he sought for qualified individuals to collaborate with.

Sanwo-Olu urged citizens to uphold their allegiance to the state and their country, saying that they owed the state a debt of patience, obedience, and loyalty.

He also said that parents should raise their children in a godly manner and teach them values such as patience, loyalty, and obedience.

The governor's wife, Dr. Ibijoke Sanwo-Olu, stated in her speech that Eid-ul-Adha, the yearly spiritual celebration, was an example of the virtues of love, faith, and obedience.

She emphasized the value of peaceful coexistence, pointing out that Lagos State was expanding rapidly as a result of the peaceful cohabitation of many populations there.

She urged people to keep up their prayers for national harmony, live in the fear of God, and show one another kindness.

Sanwo-Olu concluded that love must be evident in interpersonal interactions and recommended parents to provide a good example for their children by living a positive lifestyle.