Funke Akindele As Jandor's Running Mate By The Lagos PDP 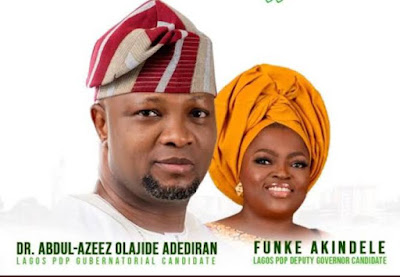 Speaking at the event, which was held at the Ikorodu home of the late Adenrele Ogunsanya, the founder of his group (Lagos4Lagos), and was attended by party leaders and a sizable crowd of party members, including Wahab Owokoniran, Chief Taiwo Kuye, a former member of the South-West Caretaker Committee, Chief (Mrs.) Aduke Maina, a member of the Board of Trustees

He claimed that it resulted from a clear knowledge of the task at hand and the requirement to collaborate with another visionary who was passionate about emancipating the wonderful people of Lagos.

The PDP flag bearer praised Akindele as the embodiment of selfless service, a philanthropist, and an amazon who would steadfastly stand by him as they formed a line on the side of the people because, in his opinion, getting to the Governor's Lodge, Alausa, Ikeja, required concentration, resiliency, and tenacity.

"My running mate is a person with a big heart and a long history of service and advocacy, a successful businesswoman who built her company from scratch to the success it is today, a member of the entertainment industry and an employer of labor, and an amazing talent whose creative works have won awards repeatedly.

"A diva from Ikorodu who has championed the need to change our ghettos and the people who live there through several of her ventures.