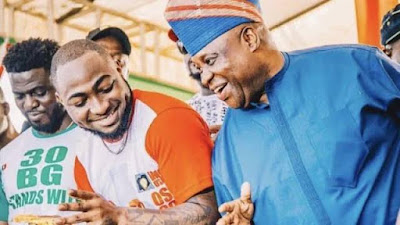 The PDP senator, Ademola Adeleke has been proclaimed the winner of the Osun governorship race by the Independent National Electoral Commission.

In a hotly contested campaign, Adeleke defeated the incumbent, Adegboyega Oyetola of the All Progressives Congress, with a total of 403,371 votes, according to Prof. Oluwatoyin Ogundipe, the returning officer for the election and vice chancellor of the University of Lagos.

Adeleke Ademola Jackson Nurudeen, of the PDP, having complied with the law's requirements, is hereby pronounced the winner and he is re-elected, he announced on behalf of the INEC chairman.

PDP won 17 of the state's 30 local government areas, while APC took 13 of them, according to the total votes tallied by the electoral umpire.

The award-winning Nigerian artist David Adeleke, also known as Davido, and his uncle Adeleke were shown in a video celebrating an early lead as the counting began.

In the meantime, there was hysterical celebration in the PDP Situation Room as the PDP declared victory in the election even before the official results were made public.

Although many people believed that Governor Adegboyega Oyetola and Senator Adeleke were the only two candidates running for governor of Osun, no less than 15 political parties participated in the election.

Akin Ogunbiyi of the Accord Party, Lasun Yusuff of the Labour Party, Oyegoke Omigbodun of the Social Democratic Party, Segun Awojide of the African Action Congress, Kehinde Atanda of the Action Democratic Party, Awoyemi Lukuman of the Allied Peoples Movement, Adebayo Elisha of the All Peoples Party, and Adeleke Adedapo of the Boot Party were some of the additional candidates.

Additionally running in the election were Rasaq Saliu of the New Nigeria Peoples Party, Abede Samuel of the National Rescue Movement, Ayowole Adedeji of the Peoples Redemption Party, Ademola Adeseye of the Young Peoples Party, and Adesuyi Olufemi of the Zenith Labour Party.

There was a significant voter turnout and the election, which was held in 3,763 units across the state's 30 LGAs, was relatively calm.

In addition to the military and the Nigeria Security and Civil Defence Corps, the Inspector General of Police, Usman Baba Alkali, had sent roughly 21,000 police officers to maintain order in the state.